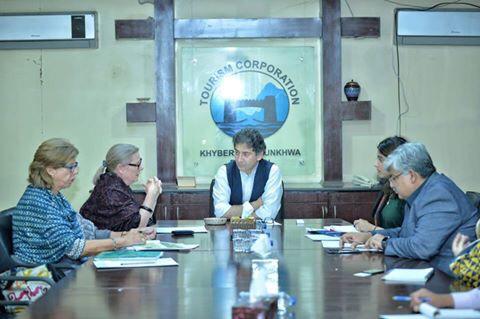 During the meeting, measures to preserve the culture of Kalash tribe of Chitral and other problems of the tribe came under discussion. Atif Khan told the meeting that the culture of Kalash will be given legal protection through the Tourism and Culture Authority. He said a bill for passage of the Tourism and Culture Authority will be presented in the Khyber Pakhtunkhwa Assembly next month. He said the bill has the support of the Assembly and it will be passed smoothly. After passage of the bill from KP Assembly, it will become a law.

The UNESCO delegation appreciated the steps of the government to preserve the culture and historic sites of Kalash tribe. It also commended the government’s efforts for development of the areas inhabited by Kalash tribe people. The delegation members said Kalash has a unique culture which attracts tourists from world over. They said people come from all parts of the world to know about the culture and history of Kalash.

The world cultural body’s representatives assured to provide all kinds of technical assistance to the government to facilitate the people of Kalash tribe in preserving their cultural values. The delegation informed the senior minister that Unesco also intends to include more cultural sites in KP in the list of World Heritage sites.

Kalsh are a Dardic Indo-Aryan indigenous people residing in Chitral. They speak the Kalasha language, from the Dardic family of the Indo-Aryan branch. They are considered unique and the country’s smallest ethnoreligious community.