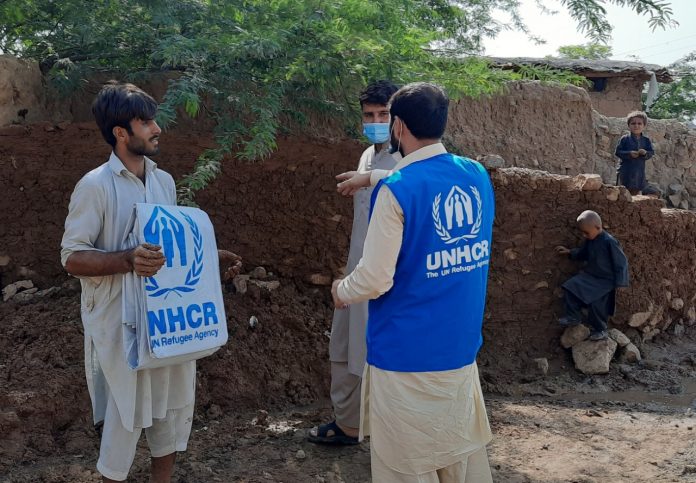 PESHAWAR: UNHCR, the UN Refugee Agency, has stepped up efforts to support hundreds of Afghan refugee and Pakistani families affected by severe rainfall and flooding in Khyber Pakhtunkhwa and Sindh provinces.

According to government’s estimates, more than 190 people were killed, and thousands of homes were washed away in flooding across the country.

The UN Refugee Agency is working with local authorities and partners to assist the most vulnerable families – badly affected by the flooding. Core relief items are being distributed to the affected Afghan refugees and Pakistani communities, says a press release.

In Khyber Pakhtunkhwa, UNHCR, Commissionerate for Afghan Refugees, (CAR) and refugee elders conducted a joint assessment. Emergency supplies such as tents, blankets, tarpaulins and kitchen sets are being provided to the most vulnerable Afghan refugee families in nine districts of the province.

The UNHCR has already handed over 2,000 blankets, 2,000 sleeping mates, 1,000 jerrycans and 1000 plastic sheets to the National Disaster Management Authority (NDMA) for onward distribution to Pakistani communities in Karachi and other parts of the Sindh province.

Ms. Yoshida said that Pakistan has witnessed multiple challenges this year such as severe rainfall, flooding as well as the COVID-19 pandemic. “Our support and efforts are in solidarity with Pakistan and its people who have been hosting Afghan refugees for more than 40 years,” she said.

“In the same spirit, we also helped millions of Pakistanis during different emergencies in Pakistan in the past,” she added.

On September 03, the UNHCR Representative in Pakistan, Ms. Noriko Yoshida inaugurated a skills development project aimed at improving the skills and income-generating capacity of local and Afghan refugee women in Quetta.

The UNHCR Pakistan had signed its first-ever agreement with NAMA Women Advancement Establishment (NAMA), a private sector partner based in the United Arab Emirates, to conduct a project to support and empower marginalized Afghan refugee and local women through skill development and enhancement in Balochistan. The project – being implemented by UNHCR’s partner Taraqee Foundation – will benefit 100 Afghan refugee and Pakistani women.