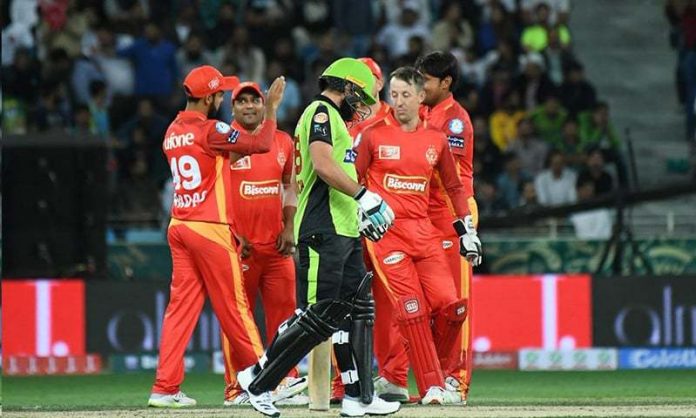 PESHAWAR: Defending champions defeated Lahore Qalandars by five wickets in the opening match of the fourth edition of the Pakistan Super League (PSL-4) in Dubai on Thursday.

Lahore Qalandars after being invited to bat first scored 171 runs for the loss of eight wickets. Fakhar Zaman was the pick of batsmen for Qalandars as he scored 65 runs and was instrumental in first wicket partnership of 97 runs with Sohail Akhtar who scored 37 runs. However, despite a brilliant start Qalandars didn’t reach the total which they would have liked and ended up on 171 for 8 wickets.

AB de Villiers was the centre of attention in the match as it was his IPL debut. De Villiers scored 24 off 17 balls with a strike rate of 141.17. Devcich was run-out on 14. In the last 10 overs, Qalandars lost eight wickets and their scoring rate also dropped.

Islamabad surpassed the target in the last over with five wickets and four balls to spare. Hussain Talat was top batsman with 37 runs, Asif Ali scored 36 runs off just 19 balls, Faheem Ashraf scored 23 in 11 balls and Ronchi scored 27 runs off 17. So this was a team effort for Islamabad United in which the batsmen shouldered their responsibility well.

Rahat Ali took four wickets, three of which came in a single over, while Brathwaite took one wicket.

Faheem Ashraf was declared player of the match for his brilliant all-round performance.

He said his experience in the playing conditions of the UAE helped him in the match. Faheem said he was a bit upset over weak performance in South Africa and he is satisfied now that he has returned to form now.