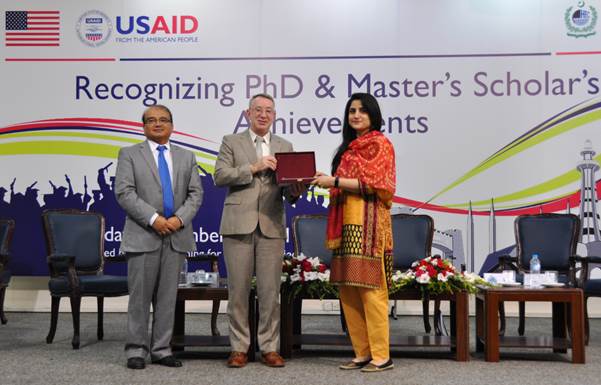 The event commemorated the achievements of Pakistani scholars who have recently completed two-year master’s and four-year Ph.D. degrees through a fully funded international scholarship program under USAID’s Training for Pakistan Project. Upon graduation, 31 Ph.D. scholars and 25 master’s program graduates who received their degrees in the United States with U.S. Government assistance have returned to Pakistan to serve as faculty members at Pakistani universities.

Mission Director Jerry Bisson spoke to more than 100 participants from academia and the public, private, and nonprofit sectors. “Quality basic and higher education are the foundation for the economic, social, and political growth of any nation,” he said. “As educators, higher education scholars are in a unique position to change the lives of hundreds, if not thousands, of people.”

The education sector is one of five priority areas of U.S. Government assistance in Pakistan. The Ph.D. and Master’s Scholarship Program is one of several USAID initiatives that strengthen the quality of education and research in Pakistan. Through this program, USAID is building the capacity of educators and teaching faculties all over the country and contributing to improved outcomes in the education system. The studies undertaken by the scholars are in areas important to academia, research, and practical application in the field of education in Pakistan.