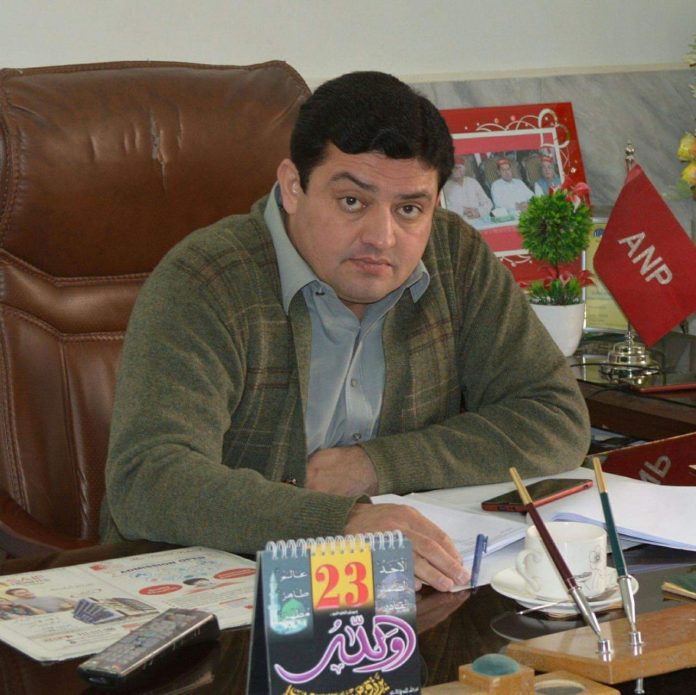 PESHAWAR: The Peshawar City President of Awami National Party (ANP) Sartaj Khan was killed by unknown gunmen in Gulbahar area of the city on Saturday noon. He will be laid to rest at his ancestor graveyard in Akhun Abad area of the city at 10 pm.

The ANP leadership has strongly condemned the murder of another young party leader and announced protest in the province on Sunday. The main protest will be held outside the provincial assembly at 11 pm. A statement issued from the Bacha Khan Markaz has said that the government has failed to protect the ANP workers and leaders and declared the attack an attempt to sideline the Awami National Party.

Assistant Superintendent of Police Gulbahar, Zonair Cheema told the media that Sartaj Khan was alone in his car when he was approached by two motorcyclists on the main Gulbahar road and was targeted. The ASP said that they have recovered two empties from the crime spot and conducting further investigation into the case. For which, said the ASP, they are also taking help from the CCTV cameras installed in the locality.

The SSP operation Zahoor Afridi told the media that Sartaj was shot inside his car in a targeted attack. “Apparently it was target killing as attackers didn’t take away his phone or wallet,” the SSP operation said.

Sartaj was taken to Lady Reading Hospital (LRH) however; he had already breathed his last. LRH spokesperson said that the ANP leader was received dead at the hospital. “He was hit in face and chest and had died at the spot,” the LRH spokesperson said. Sources in ANP said Sartaj had defeated Ghulam Mustafa in the intra-party elections held in April and was an active leader of the Party.

In protests against the targeted attack, Awami National Party workers have blocked GT road at Firdous area and chanted slogans against the government for failure to provide protection to ANP leadership and workers. ANP central general secretary Mian Iftikhar Husain, who was present during the protest, said that ANP will no more set silent and will use all political means to take revenge of Sartaj Khan murder.

Mian Iftikhar added that the targeted killing in the broad daylight in the middle of the city shows that the PTI government has failed to implement the writ of the state and provide security to its citizens.