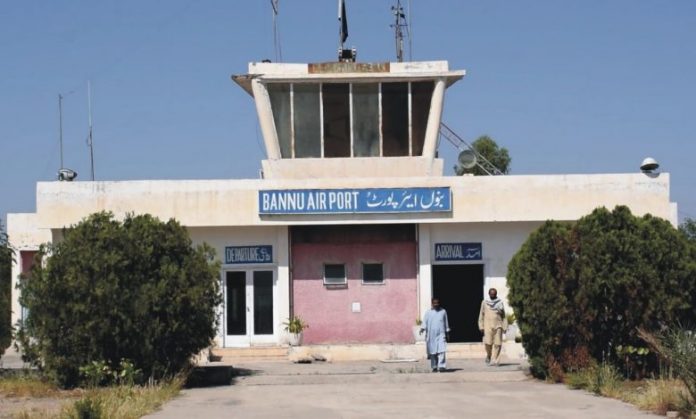 The airport, established on 3,000 kanal land at Miranshah Road, 11 kilometres west of the city centre of Bannu, had to be closed in 1999 after the government came to conclusion that it was no more viable. No flight operation could be initiated at the airport and the project remains shut for the last 20 years.

Sources said funds for upgradation of the airport were approved four years ago, but it was not implemented. Former prime minister Nawaz Sharif had visited Bannu four years ago and announced upgradation of Bannu Airport along with an announcement for release of Rs715 million funds for this purpose. However, the upgradation could not be launched for unknown reasons.

The current status of the airport is that there is a dilapidated building without any staff. For look after of the building, the government has hired two helpers and 13 watchmen.

The local people said they are looking for the upgradation and completion of the airport since long. They expressed disappointment over the fact that the government was not giving any importance to this important project which on completion will create many job opportunities and boost business activities in Bannu.

The area people believe that the completion of Bannu Airport can serve as a catalyst in boosting the overall economy of the area. They said a lot of time and money can be saved by local passengers if the facility of airport is available to them. They said many people from Bannu and surrounding areas are working abroad and they come to Pakistan regularly. They said the establishment of a full-fledged airport will facilitate such people. They demanded the government to pay attention to this important project and ensure its timely completion. They said the Bannu Airport many not be as large as other airports of the country, but even with its existing size, it will prove very beneficial for the local people, particularly those who travel frequently to different parts of the country and abroad.