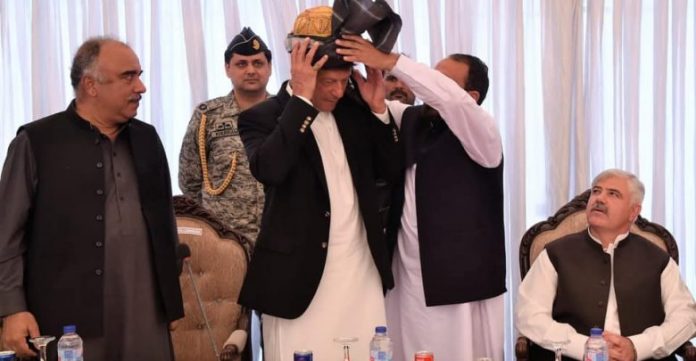 BAJAUR:  While assuring tribesmen of better infrastructure in tribal districts, Prime Minister Imran Khan said the development will occur but it will take time due to the reason that the area was for decades ruled under very “outdated laws”.

PM Khan also said the Levies and Khasadar forces will be merged into Khyber Pakhtunkhwa police as promised by the government at the time of tribal areas merger with the province. The PM announced the start of 3G/4G internet service for Bajaur without any delay. He also announced a campus of Fata University for Bajaur, the opening of Ghakhi border pass and linking Barang road with The newly constructed Swat Expressway.

“The government has sanctioned Rs 2 billion in loans for the youth of tribal districts to start their business on easy installment and zero markup,” PM Khan promised the Bajaur tribals’ gathering. Premier Imran told the gathering that the people of tribal districts will soon be provided with health cards which would cover the medical treatment of up to Rs720, 000.

During his Bajaur speech, Prime Minister Imran Khan has once again offered an olive branch to his Indian counterpart in the “best interest of the country”. “I’m ready to do anything for the country even I can negotiate with [Indian Prime Minister] Narendra Modi for the betterment of Pakistan,” the premier remarked.

Calling the people of Afghanistan brothers, he said US talks with the Afghan Taliban are underway and soon there will be a government in the war-torn country comprising of all stakeholders which, according to him, would establish the peace and stability in Afghanistan.

Taking a jibe at the previous governments of PPP and PML-N, PM Imran said, “Today the democracy is not facing any perils but those who plundered the nation’s wealth are under threat.” Due to the National Reconciliation Ordinance (NRO) in the past with the “corrupt politicians”, the country’s debt soared to Rs30,000 billion which was previously just Rs3,000 billion, said the premier, adding, “Now onward no compromise will be made on corruption and culprits will be taken to task.”