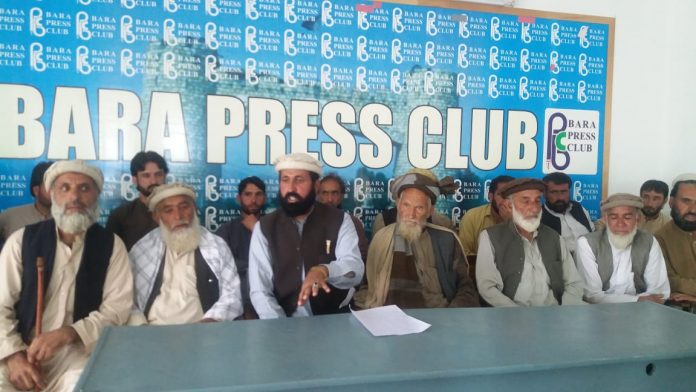 BARA: Tribal elders have criticised the Khyber Government for ignoring the far-flung areas in development schemes and called for immediate steps to ensure basic facilities to tribal people of backward areas of the region.

On Thursday, the elders were gathered from far-flung areas of district Khyber including Tor Toot, Haider Kanado, Dray Cheenay and Bar Qamabar Khel at Bara press club asking the government to take notice of the backwardness of their areas.

The tribal elders were led by Haji Hukam Khan. While addressing the press conference, the elders told that so far the government of KP has not initiated any uplift work in their areas. They said there no project relating to Education, health or of other basic amenities of life are launched in the in their particular localities.  Talking about the local committees, the elders said that no committees have shown any interest in bringing developmental projects to facilitate the lives of tribal people.

They have declared the performance of the past committees unsatisfactory urging that for the last five years,  committees were given the chance to serve the people, however, they have no shown any interest in resolving the real problems of the people of the area. Talking the miseries of women folk, they complain that they are compelled to fetch water from far-flung areas on their heads, which is a gross violation of women rights but they’ve no other alternative.  Hukam Khan said that some people are using donkeys to bring waters from streams.

Hukam Khan has refuted the allegations levelled against him by a former committee head, Ismail and others, of opposition for the sake of opposition. Hukam Khan made it clear that he has nothing personal against anyone, neither he likes to indulge in undue opposition of political rivals group. He maintained that his purpose is only the wellbeing of his people, for whom he will always raise his voice.