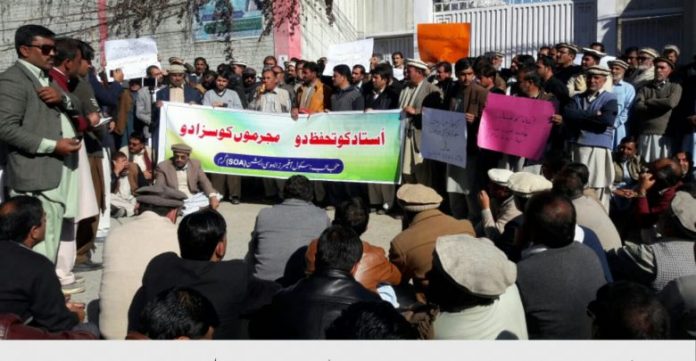 KURRAM: All government teachers have been closed schools after a Class IV employee allegedly attacked and injured three teachers in government school in Baghki in Upper Kurram area on Monday.

According to police the accused identified as Mudassir Hussein, school gardener at a high school in ​​Upper Karam allegedly attacked school teachers with the help of his colleagues and injured three teachers. The injured teachers were identified as Mazhar Ali, Qamar Ali and Ishaq Ali, who was shifted to the hospital in an injured condition.

One of the injured teachers, Ishaq, was stated to be in critical condition and was later shifted to Peshawar’s Lady Reading Hospital (LRH). District Education Officer Mohammad Iqbal Bangash has taken notice of the incident and assured strict action against all those responsible for the tragic incident. The official has further informed that the accused Gardner has been dismissed from his job and further investigation into the incident is underway.

However, in protest against torture on school teachers, Kurram schools teachers association announced to close down all the government educational institutions in Upper Karam for an indefinite time and demanded KP government to ensure the honour and respect of teachers in schools.

On the other hand, teachers protested against the incident and staged a protest rally from Government Israr Shaheed High School and marched to press club where Marjan Ali, president of the Headmaster’s Association and Syed Zahid Hussain, president of teachers Association addressed the protesters and flayed the authorities for failure to protect school teachers.

Subject specialists (SS) President Syed Mir Hussein, Lower Kurram President Rafiq Orakzai and Majid Gul said that the attack on the teachers was cowardly act and that tomorrow all the government institutions will be closed as mourning.

He demanded that those involved in the incident be punished so that no one could commit such a crime against teachers in future. He also condemned the killing of Gul Sakina, a five-year-old, school student who was allegedly raped and murdered by unknown persons on November 13, and demanded immediate arrest of the actual suspects and grant them exemplary punishment from the court of law.