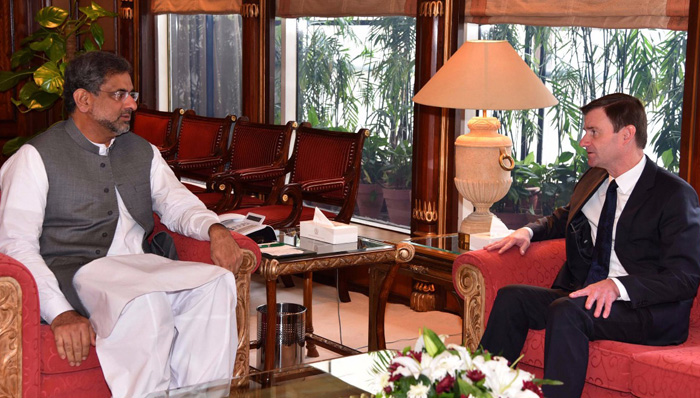 PESHAWAR, 16 September: The US and Afghan ambassadors called on Prime Minister Shahid Khaqan Abbasi at the Prime Minister Office separately on Friday and discussed regional and bilateral issues.

During meeting with Afghan Ambassador Hazrat Umar Zakhilwal, the prime minister informed him about efforts of Pakistan for peace in the region. He said Pakistan supports Afghan-led peace process in the country.

Meanwhile, the prime minister told US Ambassador David Hale that close contacts between the two countries were needed to resolve problems and achieve bilateral objectives.

According to the prime minister’s spokesman, he said Pakistan has offered countless sacrifices for peace in the region. The prime minister and US ambassador agreed to enhance contacts for ensuring long-lasting bilateral ties.

Both the ambassadors met Mr Abbasi a day ahead of his US visit. The prime minister will leave for US today to participate in the United Nations General Assembly session.