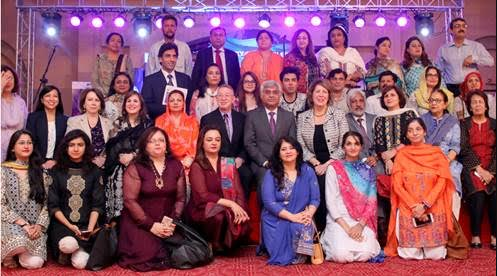 ISLAMABAD, 03 August:  The United States and the Aurat Foundation today celebrated seven years of achievements in enhancing gender equity in Pakistan at the closing ceremony of the Gender Equity Program (GEP).

In her remarks during the event, American Acting Deputy Chief of Mission Christina Tomlinson congratulated GEP participants for its diligence in increasing women’s access to justice, furthering women’s empowerment by expanding their knowledge of their rights and opportunities, reducing gender based violence, and improving the ability of Pakistani organizations to advocate for gender equity.

“For societies to thrive, women and girls must have opportunities for education, health care, and technology. They must have access to resources, lands, and markets. And they must have equal rights and equal opportunities as leaders, peace-builders, and breadwinners,” Tomlinson said. “Gender equality and women’s empowerment cannot simply be a part of development — it must be at the center of development. Advancing the status of women and girls worldwide is not only the right thing to do, but the smart thing to do.”

The Acting Executive Director of the Aurat Foundation, Naeem Mirza, highlighted the achievements of the program that has transformed the institutions and lives of Pakistani women throughout the country while mainstreaming gender into the programming of government departments, public sector universities, bar councils, and judicial academies. The program also focused on increasing the capacity of government and non-government entities to support gender equality. Mr. Mirza also thanked the U.S. government for its continued support for enhancing gender equity in Pakistan.

The event was an opportunity for beneficiaries of the program to present information about their work and included a performance by Farooq Qaiser as Uncle Sargam highlighting the program achievements and women issues in the country.
In partnership with the Government of Pakistan, United States Government programs help address and prevent gender-based violence and promote entrepreneurship and economic empowerment, political participation, and access to quality education and health care for women and girls.