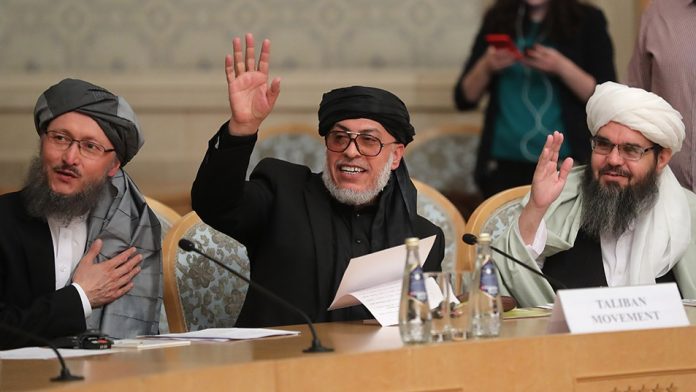 PESHAWAR: The fourth round of peace talks between the Afghan Taliban representatives and US officials will be held in in Qatar tomorrow (Wednesday) without the participation of Afghan government officials.

The Afghan government representatives could not be included in the two-day talks after refusal by the Taliban to facilitate them. Saudi Arabia and some other regional powers were insisting on inclusion of Afghan peace talks being one of major stakeholders, but the Taliban have rejected these requests and insisted that they will only held talks with the US who are their prime adversaries in the in the 17-year war. They insist that the government in Kabul is mere a puppet regime installed on behest of the US and it cannot take or implement any important decision. The Taliban went to the extent of cancelling a meeting with the US official in Saudi Arabia last week as the Kingdom insisted on inclusion of the Kabul government representatives.

The Taliban leaders while talking to different media outlets have confirmed their participation in tomorrow’s meeting. However, they rejected the impression that they are going for ceasefire. They said the withdrawal of foreign troops from Afghan soil is their prime demand, which will remain the same. Media reports said the Pakistani and Irani officials are trying to convince the Taliban side to show flexibility on inclusion of Afghan government in the talks, but no progress on this issue is expected. The Taliban say tomorrow’s meeting will be held between two sides, and no third party will be involved. This rigid stance of the Taliban has upset the Afghan government which is showing apprehensions over the process.

The negotiations for Afghan peace which were held in December last year were participated by Pakistan, Saudi Arabia and the United Arab Emirates.

The Afghan peace talks were initiated after US President Donald Trump requested Prime Minister Imran Khan through a letter to help the US in initiating talks with the Afghan Taliban. Pakistan accepted the request and facilitated the talks between the US and Taliban within few days of receiving the US president’s request. Three rounds of talks have been held so far during which the main issues of the US withdrawal, prisoner exchange and lifting of travel restrictions on Taliban leaders were discussed.