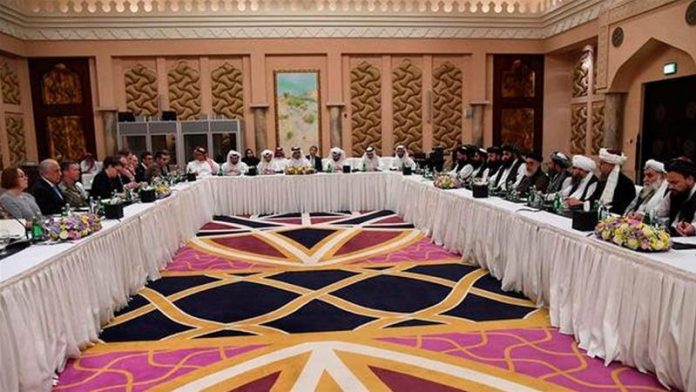 PESHAWAR: The fifth round of talks between the Afghan Taliban and the United States on Tuesday ended without any breakthrough in Doha, Qatar, however, both sides agreed to continue talks.

It was a long session of talks which continued for 16 days during which both the sides presented their arguments, but failed to convince each other on accepting their demands. According to media reports, the US officials remained glued to their demands of complete ceasefire by the Taliban, severing their ties with al-Qaeda and not allow the use of Afghan soil for attacks against the US and its allies.

On the other hand, the Taliban repeated the demands of complete withdrawal of the foreign troops from Afghanistan. The Taliban also did not show any flexibility on their stance not to talk with the Afghan government representatives, arguing that they are puppets and powerless and there is no use talking to them. They said they cannot announce ceasefire till signing a complete agreement with the US.

Reports quoting Taliban sources said the cause of stalemate was due to the US insistence of acceptance of their demands without offering much in return. However, the good thing was that both the sides are willing to continue talks and find out a solution to the 17-year-old conflict in Afghanistan.

The next round of talks is expected to be held in April.

Taliban’s main spokesman Zabihullah Mujahid said in a statement that important matters including withdrawal of US troops from Afghanistan, preventing use of Afghan soil against others and future status of the country were discussed during the long deliberations. He said both the sides will take a break now and discuss the issues in their own shares and meet again in the next round of talks. He made it clear that the Taliban have not agreed on ceasefire yet.

The Afghan peace talks were initiated with the efforts of Pakistan after the US President Donald Trump wrote a letter to Prime Minister Imran Khan seeking help in this regard. Pakistan made Taliban agree to sit with the US for talks and so far five rounds of talks have been held. No major breakthrough has been achieved so far, but both sides have agreed to continue talks in best interest of peace in the region.