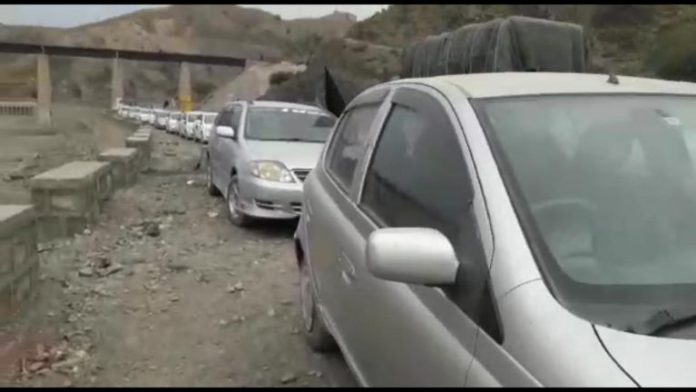 LANDIKOTAL: The deputy commissioner of Khyber district has allowed locals to ply 7218 verified Non-Custom Paid (NCP) vehicles within the district for a period of five years.

The decision was taken by the administration after the proprietors of NCP vehicles staged protest for the last three days against the district administration for alleged harassment and demand for bribes on check posts.

The owners of these vehicles staged a protest camp near Bhegyari check post on Peshawar-Torkham highway in Jamrud sub division of Khyber district.

A letter issued by the office of deputy commissioner on Saturday said that since the merged tribal districts have been exempted by Federal Board of Revenue from extension of any duty or tax, therefore the use of non-custom paid vehicles is allowed within the district until June 30, 2023.

The letter which was addressed to the sector commander Bara Shakas said the non-custom paid vehicles shall not be used outside of the district.

The order also quoted the FBR’s letter as read “These vehicles be seized if they crossover to the other areas of Pakistan from the erstwhile FATA/PATA during the said period. Administrative instructions have been issued to the concerned custom authorities to implement this decision”.

Earlier the owners of the vehicles said that the government had given them a five year time during which they can run their Non-Custom Paid vehicles throughout the tribal districts; however, they accused the district administration of violating the order and not allowing them to drive freely.

“The district administration is now demanding Rs70,000 fee against an NCP vehicle,” one of the owners said to TNN. They accused the administration of taking bribes and harassing them on the check posts.