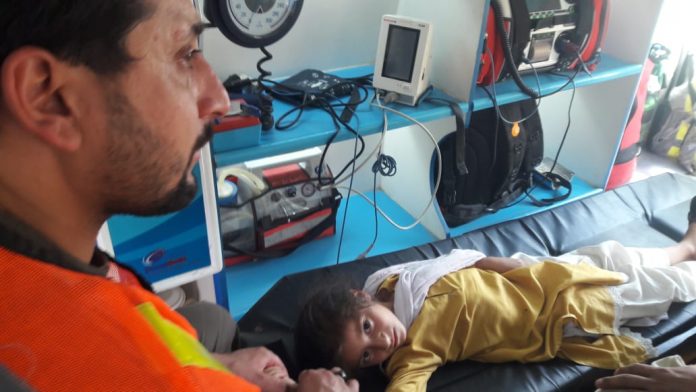 PESHAWAR: A hospital building was destroyed in Mashokhel area after a large number of students felt ‘unwell’ after taking anti-Polio drops in different parts of the provincial capital on Monday morning.

The health minister has ordered the suspension of anti-polio drive in Mashokhel. It was ordered that immunization will start once the polio vaccines are properly tested.

The incident was first reported from Mashokhel area of the city in the morning from where over 50 students were rushed to Hayatabad medical complex after they were administered the anti-polio drops. According to the spokesperson of the HMC, all the children are safe and stable.

After which a mob attacked the healthcare centre in Masho Khel village and completely destroyed it.

The officials said that school has refused polio drops to its children was finally brought into the campaign’s ambit after 10 years. This morning post-vaccination four dozen kids felt ‘unwell’ they were rushed to the hospital. After which People attacked the health unit and set it on fire.

According to rescue 1122, the incidents have been reported from Urmer, Adezai, Inqibal road area, Scheme Chowk area, Mashokhel villages from where hundreds of students were rushed to hospital in a panic. Rescue officials added that students have been provided medications and are in stable conditions.

The Lady Reading Hospital officials have said that some 80 students were brought to the hospital. The officials added that all of them are well and stable and were provided necessary medications.

Chief Minister Khyber Pakhtunkhwa Mehmood Khan and Governor Shah Farman directed the concern authorities to investigate the matter, and a file report to as soon as possible. The Chief Minister directed the hospital administration to ensure the best health care facilities to the ailing children.

District Nazim Muhammad Asim has also taken notice and ordered for an immediate inquiry into the issue. The district Nazim has contacted the caretaker deputy commissioner, Shahid Ali Khan, who informed the Nazim that all children are in stable condition. The statement released from Nazim office quoted the deputy commissioner said that sometimes children feel giddy after consuming polio drops, but this remains for a short time and it is not a serious situation.

Provincial health minister Hisham Inam Ullah Khan has visited the hospital and inquired about the health students. He said that immunization is being conducted by the World Health Organisation. The minister also ensured that proper investigation will be conducted into the incident.