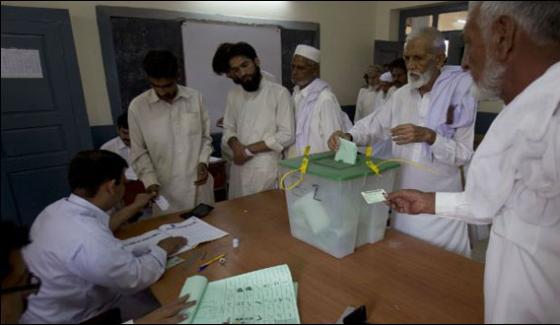 PESHAWAR, 26 October: Polling in the by-election in NA-4 constituency of Peshawar started at 8:00am today (Thursday) which will continue till 5:00pm.

Fourteen candidates are taking part in the election out of which nine are independent candidates. According to the Election Commission of Pakistan (ECP), there are 398,000 registered voters in the constituency and 298 polling stations have been set up for the election. It said experimental electronic voting will also be held on 100 polling booths in 35 polling stations in the constituency.

The district administration said strict security measures have been taken for the by-election and about 7,000 police and other security personnel have been deployed.

A public holiday has been announced in the constituency today (Thursday) and the use of mobile phones inside the polling stations has been banned to avoid any untoward situation.

The NA-4 seat fell vacant after the death of the PTI renegade MNA Gulzar Khan. A tough contest is expected among the PTI, PML-N and ANP candidates in the by-election.