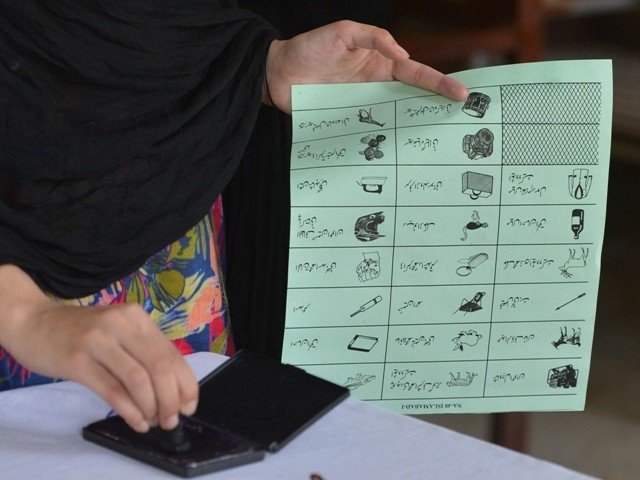 PESHAWAR: Voting in the by-election on 35 national and provincial assemblies constituencies got underway at 8:00am on Sunday amid tight security arrangements.

By-polls are being held on 11 National Assembly, 11 Punjab Assembly, nine Khyber Pakhtunkhwa Assembly and two seats each from Sindh and Balochistan assemblies. Overseas Pakistanis are also casting votes for the first time in country’s history. However, out of 790,000 Pakistanis living abroad, of which 631,909 were eligible for voting, only 7,419 people registered to vote.

In Khyber Pakhtunkhwa, 59 candidates are in the run for one vacant NA seat from Bannu and nine vacant seats from the KP Assembly. The National Assembly seat from Bannu (NA-35) was vacated by the PTI Chairman Imran Khan, who had defeated former KP chief minister Akram Khan Durrani in the 25 July elections. Imran Khan had also won from Mianwali, Lahore, Islamabad and Karachi. He eventually kept the Mianwali seat and vacated the other four seats and by-polls are being held there today.

For the provincial assembly constituencies, the by-elections are being held in PK-3 Swat, PK-7 Swat, PK-44 Swabi, PK-53 Mardan, PK-61 Nowshera, PK-64 Nowshera, PK-78 Peshawar, and PK-97 and PK-99 Dera Ismail Khan.  In PK-78 and PK-99, the elections were postponed due to the death of candidates Haroon Ahmad Bilour of the ANP and Ikramullah Khan Gandapur of the PTI. In PK-78 Peshawar, late Haroon Bilour’s wife Samar Haroon Bilour is the ANP’s candidate, while late Ikramullah Gandapur’s son is the PTI’s candidate for PK-99.

The ruling PTI has expected to get tough time from the opposition parties who have joined hands against it on most seats.