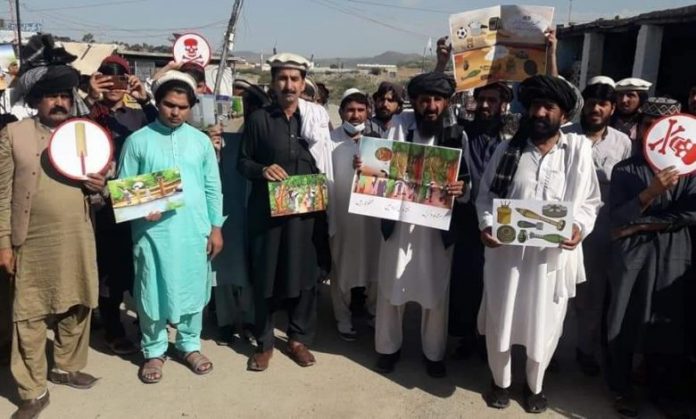 MIRANSHAH: People in Speen Wam area of North Waziristan tribal district on Sunday held a walk to create awareness among the people about the threat of toy bombs and landmines in the area.

The walk was participated by hundreds of people from different walks of life who were carrying banners and placards having messages about identification and precaution about toy bombs. The walk participants demanded the government to clear the entire area from toy bombs to protect their children and rest of population.

Malik Liaquat Ali Khan, a local elder, said several children from the area became victims of toy bomb blast who are under treatment in different hospitals of the country.

“We need to save our children from toy bombs and for that the administration will have to rise to the occasion and clear the entire area from this menace,” he said.

Other elders, Muhammad Adnan and Akbar Zaman said toy bombs are mostly found in river or fields in the area. He said these bombs, used as a trap to kill people, particularly the children, must be cleared from the entire area. They said toy bombs have ruined several families in the area and the threat is not over as such bombs are discovered every now and then which often result into tragic consequences. They said clearance operation is not only required in Speen Wam, but the rest of Waziristan as well.

On protest by the local people, the security forces have already initiated an operation to clear the area from toy bombs and land mines. A large area is cleared from such bombs during the operation.

Several incidents of toy bomb and landmine explosions have happened in Waziristan which have claimed several lives and rendered many others maimed. Landmines were mostly laid by the militants while escaping from the area after successful military operations. These landmines sometimes trap the citizens when they are going for their routine work in fields or mountains.

Toy bombs are also sometimes found in the fields or other places and whenever children find such device they bring it home and start playing with it.