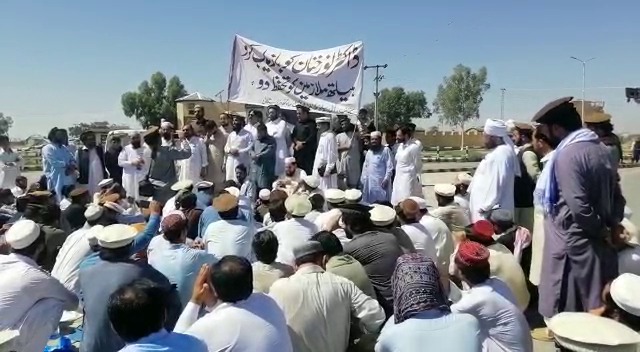 A large number of male and female doctors participated in the protest. They demanded that Dr Noor Hanan be recovered in a dignified manner and that the doctors should be provided complete protection.

The Wana Doctors Association warned to continue protests if the doctor was not released on time and hospital staff was not provided total protection. Dr Noor Hanan was abducted on September 11. According to sources, 5 armed masked men entered TB Hospital Wana on Wednesday afternoon. The kidnappers hospital staff was closed in a room and entered Dr Noorhan’s office and kidnapped the gunman at the gunpoint. Doctors boycotted duty at government and private hospitals in Wana the day after Dr Noor Hanan’s abduction. OPDs in all hospitals were closed except for the emergency.

Doctors also protested several times and demanded the recovery of Dr Hanan. In South Waziristan, a rally was organized in Wana Bazaar under the All-Political Alliance to protest the kidnapping and restoration of peace. In addition to workers of the political parties, a large number of general people also participated in the protest.

Speaking to the participants of the rally, speakers demanded that Dr Noor Hanan be rescued from the clutches of the kidnappers immediately. And all the district offices of South Waziristan should be transferred from Tank District to South Waziristan.

Advisor to Chief Minister on Merged districts Ajmal Khan Wazir has taken notice of the kidnapping of the senior doctor and directed the district administration and police for immediate efforts for his safe recovery. The District administration had said that they are checking on all the entry and exit points of Wana have been increased and a search operation is also continuing for recovery of the kidnapped doctor.