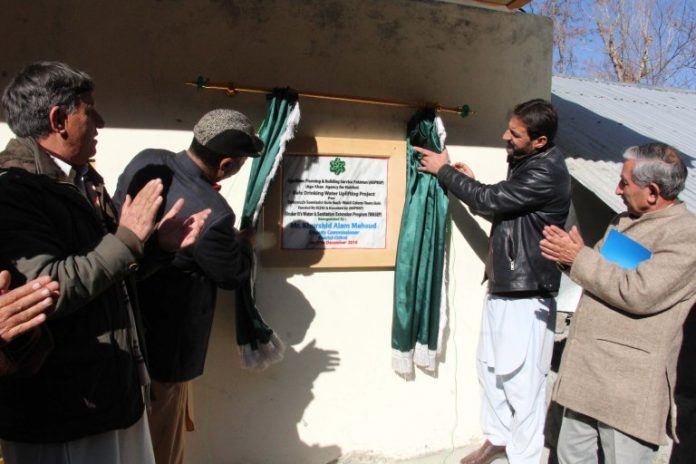 CHITRAL: A scheme for provision of clean drinking water to the residents of Dolomuch Colony and Seenlasht in Chitral has been inaugurated.

Additional Deputy Commissioner Chitral Minhasuddin was chief guest on the occasion who unveiled the plaque of the project. The water supply scheme was completed by Aga Khan Agency for Habitant (AKAH) with financial support of European Commission.

ADC Minhas while speaking on the occasion praised the quality work of AKAH. He said during flood in 2015, all water supply schemes of Public Health Engineering were washed away but only those schemes remained safe which were completed by AKAH. He said local people often came to his office when he was AC Mastuj and they complained that Public Health Engineering staff was not doing enough digging, while they praised the work done by AKAH. He said the people want work on all the water supply schemes on the pattern of work done by AKAH.

Engineer Altaf told this correspondent that they dug a 29 feet deep well on the bank of Chitral River where water was stored after natural filtration and supplied to Dolomuch Colony with the help of 180 HP electric motor. He said water is being supplied to the colony through a six feet pipe which pushes 26 liters water per second.

Regional Programme Manager AKAH Muhammad Karam said they were working on drinking water schemes mostly in remote and backward areas of Chitral. He said some 22 water supply schemes have been completed at Broghul, Yarkhun Lasht and adjacent areas of upper Chitral. He said their organisation is supplying drinking water to 87,000 people in the entire district. He specially thanked Col Shahzada Sharif for donating a piece of land for the water project.

Zubaida Parveen, a local resident, said while talking to TNN that she was very happy over completion of water supply scheme. She said the local children used to fall ill after contaminated water.

Fahmida Bibi, a college student, said before this scheme they were compelled to drink contaminated water, but now they can get water inside their houses. She thanked the AKAH for completion of the scheme.

Mirza Khan, who shifted to Dolomuch Colony from Karimabad Colony, said his family was facing numerous problems and he had to pay Rs3,000 for bringing water through tankers.

Community leader Liaqat Ali and others demanded handing over of the scheme to Public Health Engineering Department.