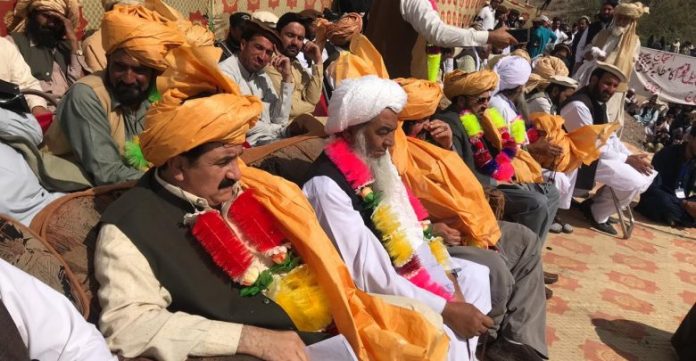 MIRANSHAH: A Grand Jirga of Wazir tribe in North Waziristan tribal district has asked the Pakistan Tehreek-e-Insaf (PTI) government to desist from construction of Kurram-Tangi Dam without taking the tribal elders into confidence.

Participants of the Jirga said construction of Kurram-Tangi dam without removing the reservations of Kabalkhel tribe is unacceptable. They said the whole tehsil will come under water after construction of the dam, and the tribe is not prepared for it. They said the government has not made any alternative plan for the 300,000 population of the area.

The Jirga members demanded the government to stop work on the dam within one month and take back the construction machinery. They also demanded written assurance from the government about scraping the project.

Kabalkhel tribe has held several Jirgas demanding the government to stop the dam project as they believe that the dam will submerge the whole area.

Last month, Kabalkhel tribesmen also held a Jirga and vowed to resist construction of Kurram-Tangi Dam Phase-II. The Jirga members made it clear that they won’t accept the construction of the dam at the cost of their precious lands. They said the government has not announced compensation package for those who would be affected due to dam construction and announced for some people is also not acceptable to them.

The foundation stone of Kurram-Tangi Dam was laid by Nawaz Sharif in 2017. The dam will have the capacity to generate 83.4 megawatts electricity and would be helpful to irrigate the agricultural lands and protect populated areas from flooding. The dam is being constructed with the financial support of USAID.