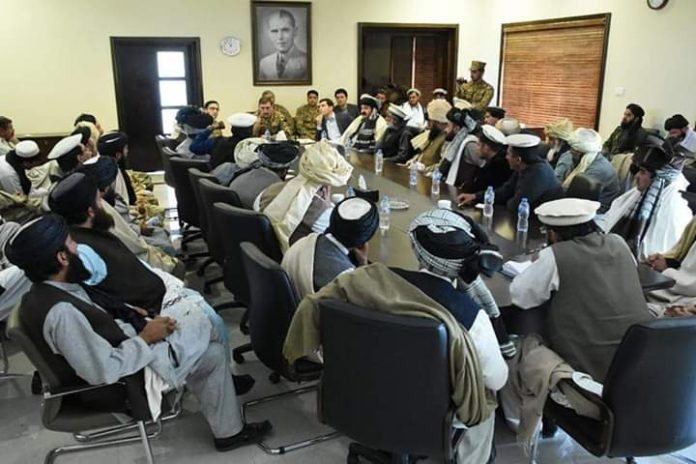 MIRANSHAH: The civil and military officials at a Jirga with the elders of North Waziristan tribal district on Friday assured that the relatives of the criminals will not be arrested and payment of compensation to the owners of damaged houses will start immediately.

The tribal elders were told at the Jirga that payment of compensation to the owners of damaged houses in Haiderkhel, Hasukhel, Epi and Darpakhel will initiate within the next 10 days. The people whose claims have been rejected will be given new forms for survey of damage assessment.

The Jirga decided that work on Kurram-Tangi dam will not be commenced till addressing the reservations of Kabalkhel tribe. The local population will also be taken into confidence over the issue of mineral resources. The people of Mohammadkhel will particularly be satisfied over the minerals issue.

The officials assured the Jirga that all the arrested persons who are proved innocent will be released immediately. The data of the missing persons will also be shared with the tribal elders.

On the occasion, Rs33 million was announced for re-construction of government high schools in Hasukhel and Haiderkhel. The elders were told that the National Bank Mir Ali branch will be restored soon and passport office will be shifted to Mir Ali or Miranshah. The Jirga was told that talks were being held with the prime minister on declaring Waziristan a tax-free zone. It is expected that the custom duty on items brought to Waziristan from Afghanistan will be lifted.

The General Officer Commanding (GOC) assured that he will take up the issue of provision of admissions and jobs to the candidates of Waziristan according to the regional quota. The problems of the students will be resolved on priority basis. The local youth will be employed in local projects and they will also be provided technical training.

The officials said mobile phone service cannot be provided in the region immediately, however, efforts will be made to improve the service of PTCL. They also said that the road construction schemes will also take time for completion. The officials sought time for resolution of other problems and assured that the process of Jirgas will continue for better coordination.