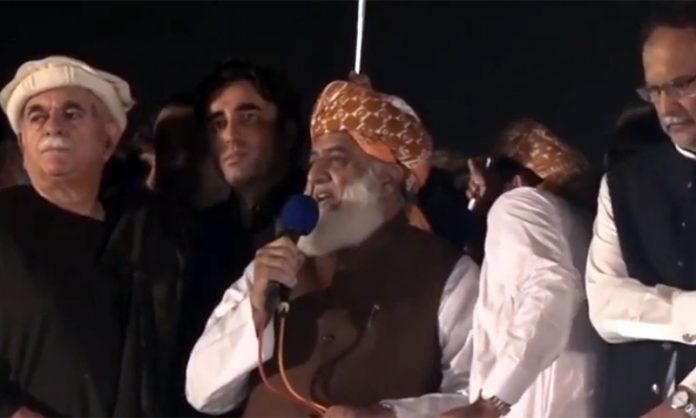 PESHAWAR: The Jamiat Ulema-e-Islam-Fazl (JUI-F) ameer Maulana Fazalur Rehman has said the writ of the government has come to an end and now the marchers will peacefully run the country.

The Maulana said while addressing the participants of the Azadi March on Saturday night that the options of the opposition parties are wide open and the option of going to D-Chowk is also under consideration.

For the time being, he said the marchers will stay at the designated venue, but they can change the strategy if the Rahbar Committee decided so. He said the JUI-F knows very well how to move a protest movement forward. He said the JUI-F has held several million marches peacefully and it will still remain peaceful in Islamabad, but this peaceful attitude must be respected. He also criticised Prime Minister Imran Khan for his language against the opposition leaders. He also alleged that the government has shut the doors of negotiations.

He made it clear that women are very much part of the march and no one has pushed them aside.

Fazlur Rehman also distanced himself from waving of flags of banned outfits at the march venue and said it was a propaganda.

Meanwhile, the opposition leaders represented in the Rahbar Committee said at a news conference that contacts with the government will be maintained, but they will not budge from their demands of resignation of Prime Minister Imran Khan and fresh general elections.

Akram Durrani, Convenor of Rahbar Committee, said the Rahbar Committee discussed options of collective resignations from the Parliament and lockdown of the country. He said undemocratic forces must not take undue advantage of the situation.

Akram Durrani said the government, not the opposition, was running away from agreement.

The ANP leader Mian Iftikhar while addressing the news conference took exception to the statement of Punjab minister and said deceased family members must not be dragged into political debate.