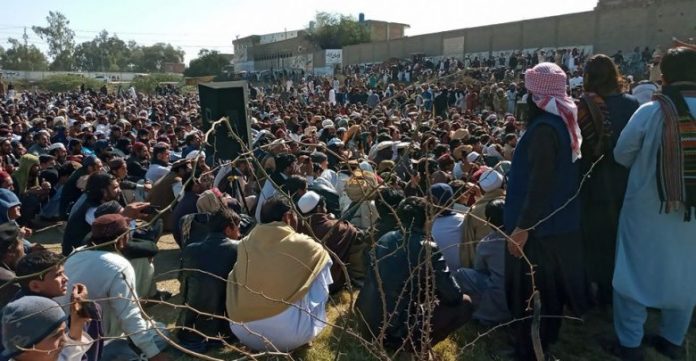 WANA: People from Mehsud tribe of South Waziristan tribal district are staging a sit-in in Tank for the last one week to lodge peaceful protest over non-payment of compensation to people who were affected from militancy and military operations.

The sit-in is titled ‘Yao Maseed’ which means ‘One Mehsud tribe’ – indicating that the Mehsud tribesmen have united in their peaceful struggle for their rights which have been denied for the last many years.

When the government announced military operation in the areas inhibited by Mehsud tribe in South Waziristan, the local population was asked to vacate the area on a short notice. It was an extremely difficult and painful thing for Mehsud tribesmen to leave their areas, but they did not hesitate and immediately vacated the whole area in larger national interest and for peace and security in the region. They left behind all their belongings and lived the life of displacement for many years.

The houses and business centres of local tribesmen were also badly damaged during the military operation during which the militants were driven out from the area. The left out buildings were damaged due to the impact of climate change.

After the operation, the government announced a package of the affected people under which the owners of completely damaged houses were to get Rs400,000 each, while the owners of partially damaged houses were to get Rs160,000 each. Survey teams comprising government officials and local tribesmen were formed to assess damages and compensate the affected tribal families. However, the whole process was marred by its extreme slow pace, lack of proper attention and alleged corruption by the local administration.

The Meshud tribespeople waited for five to six years for the survey to complete and payment of compensation, but it did not happen and finally they ran out of patience and they staged a sit-in against the administration which is continuing in Tank district for the last one week.

The participants of the ‘Yao Maseed’ sit-in at the FC Ground say they are determined to continue protest until their demands are accepted.

The affected people of North Waziristan have also staged similar protest in Peshawar.