Mohsin Dawar was invited to the function as chief guest. The ceremony was arranged at the Jirga Hall in Civil Colony Khar, the headquarters of Bajaur tribal district. The lawyers community of Bajaur had invited political leaders, youth and other people from different walks of life to the function.

Local sources said the area leaders of the Jamaat-e-Islami (JI) were not happy over invitation extended to Mohsin Dawar which caused a controversy even before the start of the ceremony. The sources said that after thorough deliberations, it was agreed that only two leaders, the Pakistan People’s Party’s Syed Akhunzada Chattan and Member Khyber Pakhtunkhwa Assembly from JI Sirajuddin Khan, will address the function, and all parties agreed on this arrangement.

It is worth noting that the newly-elected secretary general of Bajaur Bar, Naseer Ahmed, is associated with the PPP, while president is associated with JI. When the oath taking function started, Akhunzada Chattan and Sirajuddin Khan addressed the participants according to the agreed format. However, after their address, Naseer Ahmed invited Mohsin Dawar for speech, claiming that permission has been granted for his speech, and the participants must show patience in this regard. It infuriated the JI activists, who not only walked out from the hall, but also started pandemonium. 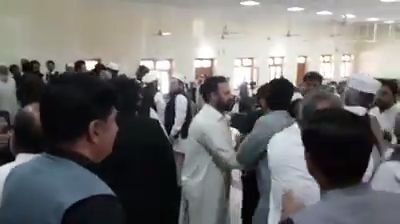 In a viral video on social media, it can be seen that the infuriated activists of JI went towards the Bajaur Bar secretary general and tried to torture him. The video also shows various activists quarreling with each other and also throwing chairs. Other participants separated the quarreling activists and the function could not go ahead.

Sources added that Naseer Ahmed was previously associated with the JI, but he later on joined the PPP after differences with the JI local leadership. The JI activists were already angry with Naseer Ahmed and on Saturday, Naseer Ahmed’s alleged violation of the agreement prompted them to resort to violence.

The JI deputy secretary general from Bajaur, Farmanullah told TNN that some people made the function controversial just for the sake of their ego. He said linking the pandemonium to Mohsin Dawar is unjust.