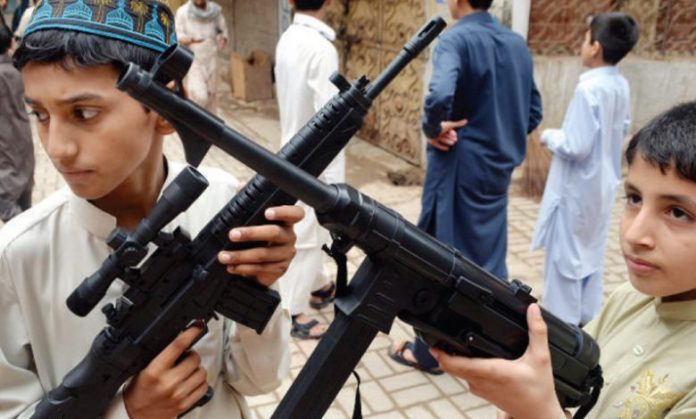 PESHAWAR: Some people use strange tactics these days to make their own identity and stand out among social media users. One of such tactic is the display of weapons. Every day we see news on media that the display of weapons on TikTok cost the youth dearly, and the police arrested him, and so on.

This brings a question to our minds that why is this kind of unhealthy obsession growing in the minds of our youth?

Alvina Zaheer Khattak, a psychotherapist at the Shafique Psychiatric Center in Peshawar, told TNN that a research was conducted in 1960 on whether looking at a weapon has any effect on the brain? The result of the research showed that even looking at a weapon alone can lead someone to emotional thinking. When multiple and repeated advertisements of such nature run on TV, the person sub-consciously starts thinking about using it. This further entices them to get information about it and thus he can find the relevant thing at the end. The thought and action are called subliminal message.

Our young generation has identity issues only because we have very few sources of entertainment. As a result, they use shortcuts to make their identity.

“On the flip side, their identification rather gets destroyed because of such cheap tactics. If a child, who has a knack for acting, has a way in front of him, why would he use his energy in displaying such cheap tactics and identifying himself only by displaying weapons?”

The human subconscious tends to bring about dangerous outcomes. That’s why, psychologists also mention that if you have access to weapons, it can deteriorate your subconscious and can thus change your whole personality. This, as a result, gives birth to overwhelming emotions. Even if one witnesses any such moment in his life, it can leave a negative impact on mind in the long run.

Alvina Zaheer Khattak said today’s children are not only familiar with the names of Kalashnikovs, repeaters, TTs, but also ask their parents to get them the same weapons to play with. These toy guns are widely sold on the occasion of Eid in various markets and sidewalks as well.

The display of such toy guns in the hands of innocent children, who are supposed to be the voice of future, is a new inclination. Although in the past, these toys were sold in the bazaars and were seen on a limited scale in the hands of a few children, but now it is being noticed that merchants are stockpiling these toys in the bazaars, which aren’t lethal but can be harmful if used on such a big scale. In addition, their prices are kept very low, which is why it is easy for parents to get their children access such toys. As a result of which, children are slowly moving towards the use of weapons.

How to protect children from gun culture?

Alvina Zaheer Khattak says that public representatives, social institutions, government circles and above all parents can play a vital role in this regard. Representatives of public opinion should stop this negative trend, and should play their role in awareness in the masses.

The government should ban the sale and purchase of such dangerous toys. Parents should keep a close check on their children’s whereabouts.

Such problems stem mainly because of the negligence of the parents which later give rise to regional and national issues. Since childhood is considered to be the most beautiful part of kids’ lives, as it’s their learning stage in which they go through different processes, which, as a result, plays an important role in their character building.

Unfortunately due to low literacy rate, we leave some bitter memories in the minds of our future architects that tend to follow them like a demon for the rest of their lives and proves to be an obstacle in their way of becoming successful.

Why display of arms is banned?

The Peshawar High Court lawyer Qaiser Khan told TNN that when law and order situation deteriorates, the government enforces Section 144 (CRPC), which prohibits the display of weapons and all licensed weapons are suspended for a specific period of time. Only law enforcement and public security personnel are allowed to use weapons in this time period.

This section can remain enforced for two days but the district administration has the authority to extend the said time period for another two months.

Advocate Qaiser Khan said that if someone is in dire need of carrying arms in the meantime and his life is in danger i.e. personal enmity etc. then he will seek permission from the Home Department through an application after which the applicant from the Home Department issues a letter to them and thus they are allowed to keep weapons for the reason of personal security.