Home Blogs When an Afghan student asked me upon seeing my media card: ‘What...
Facebook
Twitter
WhatsApp
Linkedin
Email 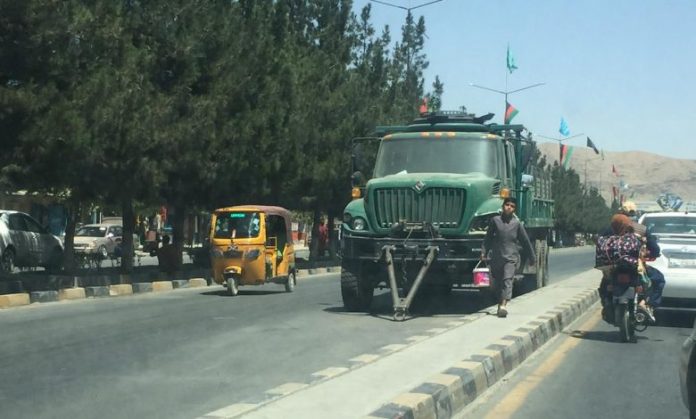 PESHAWAR: I arrived at the Torkham border from Peshawar on the morning of August 24th. The previous trek to the ancient location between the mountains, as well as Afghan ladies in blue and white shuttlecock burqas and any handcarts that used to cross the border, were nowhere to be seen. There used to be a lot of hustle and bustle on this border in normal conditions, but the atmosphere was dismal now. On both sides of the border, the mountains appeared to be heavier and scarier than they were today.

I began my journey to Afghanistan in a tight passageway after resolving immigration concerns at the border. Two persons cannot pass this hallway at the same time because it is so narrow.

The disappearance of three brilliantly coloured flags on the Afghan side was the first alteration visible from a short distance upon arrival at the border. It all happened so fast that I couldn’t believe what I was seeing. Security guards in traditional Shalwar Kameez stood guard beneath the flag.

The Taliban have taken control of Afghanistan now. I assumed that passports and other paperwork would be scrutinised at the border. The image of the Taliban waiting for me crossed my thoughts. As soon as I crossed the border into the neighbouring country, I noticed a student sitting on a broken chair on a small footpath, turning the hands of the clock. The Taliban didn’t even smile at me or respond when I arrived, let alone going through the procedure of looking at passports, visas, and other documentation.

The first Taliban cars appeared as we approached the major highway in the Torkham district of Nangarhar province. Long hair, an Islamic Emirate bandage on the forehead, and chin resting on the barrel of a modern rifle while listening to Islamic Emirate tunes on their phones, this is where the shift in Afghanistan could be seen and felt.

Torkham Town, on the other hand, was going about its business as usual. “One man, Kabul,” the conductors were heard saying at the bus stop. This is a mythical tradition. In the car, there will be room for three passengers, but in Kabul, the voice of “just one person” can be heard. Perhaps due to the absence of passengers, their voices got even louder today, as indicated by the conductors attempting to compel a possible ride in the car by grasping hands from afar.

From here, I flew to Jalalabad, the provincial capital of Nangarhar. Hundreds of trucks carrying fruits, vegetables, and other goods were waiting to enter Pakistan along the path. The Afghan army’s outposts were deserted, although most of them were safe due to the surrender. There were only two Taliban checkpoints along the trip.

We reached after a two-hour ride Jalal-Abad, where life was in full swing and motion. The noise of Indian-made rickshaws in the bazaars reminded me of any densely packed Pakistani road, where ten rickshaws may be seen in front and behind a large vehicle. Even traffic wardens were watching the helpless and furious roadside traffic after the city’s government fell.

Due to the lack of government in Kabul, all National Bank branches were closed, with effects felt not only in Jalalabad but throughout the country. The economy in the big cities has nearly come to a halt. I wanted to go to the Abdul Ghaffar Khan aka Bacha Khan shrine in Jalalabad, but it was locked. Following inquiries, it was discovered that the Taliban had blocked it to all types of visitors this morning due to security concerns.

The beauty of Laghman province could be seen on the route to Kabul, Afghanistan’s capital, as I started my adventure. On one side, there are mountains, while on the other, there is river water. Walking down this narrow road was nothing short of an adventure.

Sitting in the back seat of the car, Ashraf Ghani briefed on the defeat of the Soviet Union and the details of the development of power projects in the Ashraf Ghani government. The journey was made more pleasant by Persian and Pashto music, but when the driver saw the Taliban car from a distance, he had to switch off not only the tune but the full sound system. People’s fears about the Taliban administration from twenty years ago are still lingering in their imaginations.

On the route to Kabul, forlorn Soviet tanks on the major highway bore evidence of the Soviet Union’s loss. The Taliban greeted us with “where are you coming from, where are you going?” when we entered Kabul after mounting the high hill of Mahipar. These sentences sounded quite familiar to the ears.

In reality, the Kabul represented in Pashto literature was much more beautiful and larger. We arrived Shah Do Shamsheer after passing through high-rise Western-style buildings, wide highways, and unpredictable traffic.

Afghans in Kabul are concerned about the Taliban’s way of life, manner, and views. Mujahideen take AK-47s and other weapons with them wherever they go, whether or not they are needed. The Taliban’s sole option for dealing with the people outside the airport was to fire from time to time. The Taliban used airstrikes to communicate with one another as well.

US military trucks that used to convey weapons, equipment, and troops were now parked aimlessly on the road outside the airport.

A rush could be zeeny outside the banks in Kabul’s New City the next day when the Taliban leadership announced that all banks would reopen. As I prepared to report with my phone and tripod, as usual, a crowd gathered around me. The Taliban’s car came to a halt when it noticed the rush, and a young student approached me, speaking first in Persian and then in Dari.

I was answering by saying Insha Allah, Masha Allah, Subhan Allah and Alhamdulillah. And when he saw my card and saw my name and other details on the card in English, he said “What Harry Deng”, which I couldn’t understand. A local friend of mine calmed him down by talking to him in Persian. The friend later said that in fact, the Taliban are also trying to learn English in this modern age. “What Harry Deng” means “What Are You Doing?”.

The Taliban, who have been at war for 20 years, are no longer a threat to Kabul’s beauty. Outside the Arg, the Taliban, who were amused by listening to the Islamic Emirate’s anthems, told us that, “The city’s map has been updated. By taking the help of the general people, we use to arrive at our destination ”

I happened to visit the tombs of Zahir Shah and his father, Nadir Shah, who is revered as the “Father of the Nation” for his 40-year reign over Afghanistan. Locals attacked the tomb after the Taliban took power, according to Amimullah, the monument’s guardian. The bulbs were also removed, and the water system failed, causing the fountains to dry up. Other objects were attempted to be broken, but the people were caught by their feet and dragged out of the tomb.