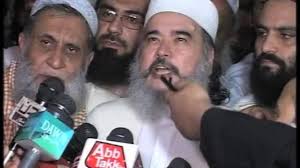 PESHAWAR, 24 June: Mufti Shahbdin Populzai, head of a private Ruet-e-Hilal Committee and cleric of a Peshawar’s historic Masjid Qasim Ali Khan, has mysteriously went missing on Friday from Islamabad.
Mulanana Abid Kamal, member of private Ruet-e-Hilal Committee, told a foreign news agency that he went to Saudi Arabia for performing umrah. However, sources said that he was arrested by security agencies in Islamabad to avoid two Eids in country. Populzai had convened meeting of the moon sighting committee in Masjid Qasim Ali Khan for Eid today at 7:00 pm.

Another member of Populzai’s committee said that he was called to Islamabad yesterday for meeting and hasn’t come back to Peshawar. His phone is switched off and the member fear he may be house arrested by federal or provincial government.
Populzai’s mysterious disappearance gets social media attention. His disappearance discussed on social media platforms like Facebook and Twitter.
There are also reports that deputy of Poluzai’s committee was arrested in Peshawar.
Mulanana Abid Kamal said that other committee members will receive and accept witnesses today. Meanwhile, Charsadda popular cleric Muhsinul Haq announced that he will announce its decision of Eid if it receives credible and authentic evidence.
The central Ruet-e-Hilal committee for sighting the Shawal moon will be held on Sunday evening at Peshawar.