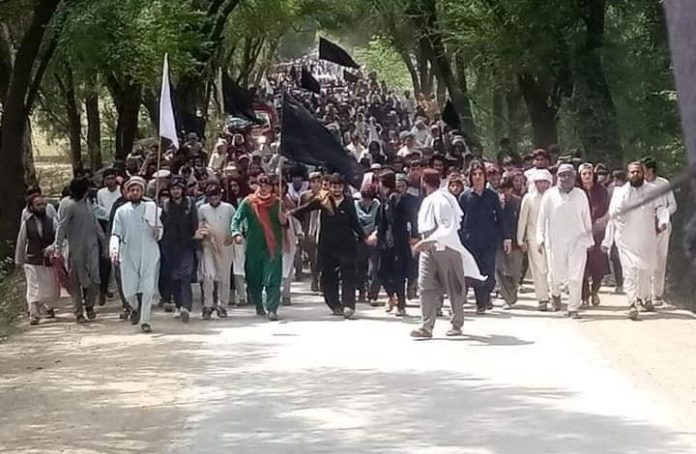 Peshawar: The sit-in over the killing of 4 youths at Jani Khel in Bannu District has been called off as a result of an agreement that was made between the Khyber Pakhtunkhwa government and local elders of the district.

In the light of the peace agreement held between the protesters and the government, the killers of four young friends will be arrested, with the promise of an honest inquiry to be held along with making sure that the detainees will be released within three months after conducting a thorough investigation.

After the agreement, the sit-in on Domil Bridge Link Road in Bannu has been called off and the partakers have been asked to get back to their respective areas and homes.

In this regard, Kamran Bangash, Information Adviser to the Chief Minister, Khyber Pakhtunkhwa, told a press conference in Bannu on Monday that the provincial government had accepted all the demands of the Jani Khel nation and they would be brought into practice instantly.

He said that the provincial government had been in touch with the leaders of Jani Khel nation from day one and had announced from day one to approve all their demands but “some political elements are bent upon not ending the sit-in and dividing the nation”.

He said that he had been busy for the last 9 days in a sit-in along with the 4 dead bodies on Link Road from Jani Khel to Dami Pul but after consenting to the agreement they were now dispersing peacefully.

What were the points of agreement?

The provincial government assured the people of Jani Khel, in the light of the agreement, that law and order would be guaranteed in the area, armed groups would be eradicated from the area and no one’s house would be destroyed.

Those arrested in government custody will be investigated within 3 months and innocent people will be released based on priority and the culprits will be punished according to the current laws of the State of Pakistan.

A special development package will be given to the heirs of the martyrs and for the development of the area. Whereas those arrested during the protest will be released immediately.

It is written at the end of the agreement that the incident of four martyrs will be investigated clearly and thoroughly and the culprits involved in the incident will be punished according to the law.

It may be recalled that 27 days ago, 4 friends in question, belonging to Jani Khel, went hunting and they did not return home after that. Their mutilated dead bodies were later found in a nearby graveyard on the 21st of this month.

The stand of Jani Khel police station regarding the matter

Before the success of talks with protesters on Dami Link Road on March 21, Saeed-ur-Rehman, a Jani Khel policeman, told TNN that the victim Ahmed Khan’s uncle Usman Khan, son of Azeem, told police at Utmanzai police station that he got the information of the 4 children being killed, when he reached the place of the crime their bodies were already being buried in the ground, while some were outside as a result of dogs’ scratches.

He said that,” we have no personal grudges with anyone, so we don’t know who killed the children. The government must take serious action and should arrest the culprits,”

According to police, the victims were identified as Ahmad Khan, Atifullah, Arhamullah and Mohammad Rahim, aged between 13 and 17.

Police said the registered case involved murder and kidnapping for ransom cases against unknown people and after registering the case, police have started an inquiry into the incident.

In an answer to the question, why police fired tear gas at the protesters, Saeed-ur-Rehman said, “Yesterday, a large number of protesters were passing within the limits of Jani Khel police station, which were out of police control. So the police were compelled to use the tear gas to stop them ”

The police refused to pelt direct gunshots on the protestors and said that to prevent panic in the area, the Government had rather chosen to shut down the mobile and internet services to the public until today.

During the sit-in yesterday, Awami National Party had participated from Bannu to express solidarity with former Senator Baz Mohammad Shirka. And it was shown in a viral video circulating on social media that the police were firing tear gas on the protestors.

Later, Baz Mohammad Khan said in a video message that he would go home only after getting done with the objective for which the nation had set out.

Nasir Khan, who was present at the sit-in, told TNN by telephone that violence in Jani Khel has become part of the routine now and that people do not take any serious notice of the problems as they face such incidents on a daily basis now.

“The biggest problem here is the law and order situation and the extrajudicial killing and disappearance of innocent people,” he said.

It may be recalled that in February, 4 women working for an NGO in North Waziristan were shot dead by unknown people who were acquainting women of the area with sewing skills.

The government’s stance on the incident

The foreign broadcaster BEC attributed the statement to Khyber Pakhtunkhwa Chief Minister Mahmood Khan and said that they make sure to clear Jani Khel of these scoundrels, whether they were good Taliban or bad Taliban, and would not let them go at any cost.

In his statement, the Chief Minister announced Rs 2.5 million each for the families of the deceased and assured a clear inquiry into the incident