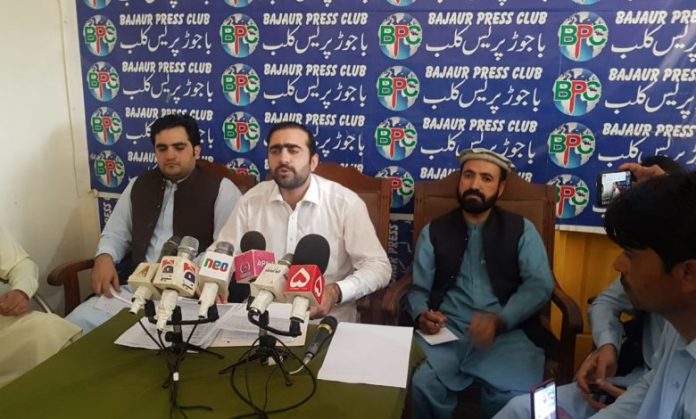 KHAR: The local leaders of the Pakistan Tehreek-e-Insaf (PTI) said on Saturday that they will not allow any conspirator to disturb peaceful environment in Bajaur tribal district.

Addressing a press conference at Bajaur Press Club, provincial minister Anwar Zeb Khan’s son Sikander Zeb Khan, PTI Bajaur president Dr Khalilur Rehman, Muhammad Ayub Khan, Najeebullah Hilal, Dr Ayub, Burhan Salarzai Fazle Manan and others said the people of Bajaur stand behind the security forces for ensuring peace and tranquillity. They said the enemies of peace will never be allowed to thrive in Bajaur and the local people will stand up against those who want to create chaos.

Sikandar Zeb and other speakers said the incident which happened in Civil Colony Khar during the oath-taking ceremony of the district bar association was tragic. They said whatever happened with the guest (PTM MNA Mohsin Dawar) was wrong and no one can approve such treatment of a guest, but the question arises that who invited such a ‘controversial’ person to Bajaur and for what purpose? They alleged that a failed politician in Bajaur cashed the function for vested interests and he is still misguiding the people.

The PTI leaders said establishment of Barang Tunnel, interest-free loans for local youth, solarisation of 300 mosques, sports complex in Nawagai, playgrounds at tehsil level and promoting talented youth in different sports are among the top priorities of the ruling party. They said the combined visit of Prime Minister Imran Khan and Khyber Pakhtunkhwa Chief Minister Mehmood Khan to Bajaur was a very successful visit which will prove helpful in speedy development.

Few days ago, the oath-taking ceremony of Bajaur district bar association was marred by pandemonium when the PTM MNA from North Waziristan was invited to address the function without the consent of participants.