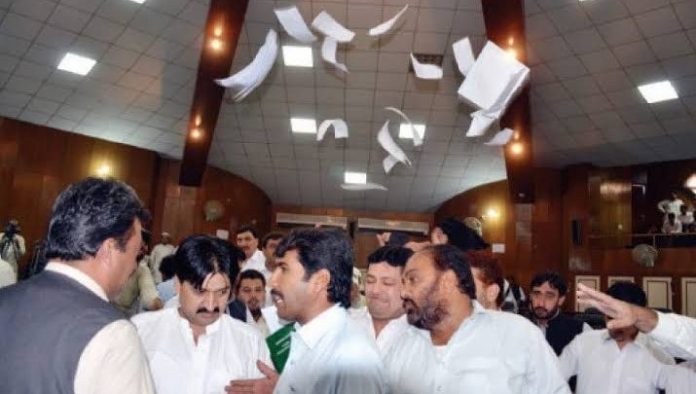 PESHAWAR: Local government elections are termed as nursery of democracy because it serves as a route for the political leadership to come to the mainstream and participation of local people and family members in these polls makes it an event of high significance on grass-roots level.

In Khyber Pakhtunkhwa, tenure of local government expired on August 28. The Election Commission of Pakistan had asked the KP government to bring legislation by April 2019 if it wants to bring new local government system, but despite several notices, the new system could not be introduced.

In Punjab, the local government system was practically folded one year before its natural expiry with the arrival of PTI government. The government had claimed to bring a new LG government structure in the largest province, but nothing is visible on ground.

In Balochistan, the government made similar claims of introducing a new system. The opposition has got a stay order against the new system from court, while the Local Government Department is also not taking any interest in the issue and not pursuing the cases properly.

Aziz Buneri, a senior journalist in Peshawar, said the KP government, opposition and bureaucracy consider the local government system a threat for them. He said nazims in the previous set up had ample funds. He said former Peshawar Nazim Arbab Asim had funds of over Rs2 billion, while even the National or KP Assembly members could not have such amount of funds. Arbab Asim was also considered very close to the former CM and he used to be present in every important meeting, while it was not the case with four MNAs and 11 MPAs of Peshawar. In such a scenario, the lawmakers were not comfortable with so much importance given to the LG representatives.

Aziz Buneri said election of MNAs and MPAs involve huge expenditure on part of candidates, while LG representatives are being elected with much lesser expenditure, but they get more development funds than lawmakers. That is why the government and opposition lawmakers don’t like the LG system.

The senior journalist said the deputy commissioners are also not comfortable with nazims with so many powers. The government, opposition and bureaucracy are united in opposition of LG system and they are successful in keeping this system at bay so far as the district council is completely abolished in the new system. In the old system, there were 964 district councillors and as many tehsil councillors, but in the new system, 129 tehsil chairmen and seven local government mayors will be elected in the whole province including the newly merged districts.

Aziz Buneri said the tehsil councillor will come through direct election and it will become virtually impossible for a common many to win such election without huge resources for election campaign.