Home Features & Interviews Why corona is not as lethal in Pakistan as in Americas and...
Facebook
Twitter
WhatsApp
Email 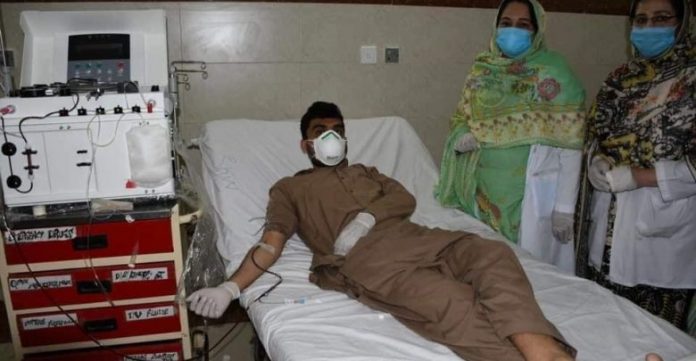 PESHAWAR: Coronavirus is not as lethal in Pakistan as it is in Europe and Americas. In Pakistan, coronavirus did not cause respiratory problems in majority of patients, rather they experience nausea or loose motions. That’s probably the main reason behind low death ratio in Pakistan.

These thoughts were expressed by Dr Ahmed Rehman, who is serving in the special ward for coronavirus patients in Hayatabad Medical Complex (HMC), Peshawar. Dr Ahmed said the spread of the virus in Pakistan was slow as compared to Europe and North and South Americas which gave rise to thoughts that Pakistani people are relatively immune to the disease. However, that proved to be a wishful thinking when Pakistan became the country among the 15 most affected countries as far as coronavirus infections are concerned.

Dr Ahmed said Pakistani patients show different symptoms of the disease as compared to the patients of the developed world, that is why the death ratio is low. He said the weather conditions have an impact on the symptoms of the disease. He said the impact of the virus on the respiratory system is more severe in winter as compared to summer. However, he said, it doesn’t mean that the virus is not potent in summer. He said the main reason behind massive death tolls in the US, England, Italy, France and Spain was that the virus spread there during winter.

It was feared that Pakistan may not be able to handle the corona situation keeping in view its limited resources in the healthcare.

A research in May showed that 90 percent of corona deaths were from rich countries of the world.

Dr Ahmed said it is generally believed that the actual number of corona deaths and infections is much more higher than official projections because of limited testing capacity. He said there are many people who don’t even go for test despite showing symptoms as they are not ready to go into isolation. He said majority of patients are asymptomatic in Pakistan and they don’t bother to go for tests and there is also no facility for random testing. He said limited testing has hidden the actual number of corona patients.

Dr Ahmed said the ratio of cases from the tests in America and Pakistan is similar which means that the pandemic has spread in the whole world with same intensity. He said more testing will unveil more cases. He said many people in Khyber Pakhtunkhwa province don’t go for test to avoid social stigmatisation. He said there are also many people who don’t isolate themselves after showing symptoms and cause spread of the virus.

WHO Response Regarding Pakistan

A WHO representative in KP said coronavirus cases in Pakistan may be much higher than reported cases. However, he did not agree with Dr Ahmed that death ratio in Pakistan is lesser compared to developed world.

The official said on condition of anonymity that many people in Pakistan, particularly in KP, die at home and they don’t have any medical record or death certificate. He said people also don’t want to know the reason of death because in that case SOPs of burial need to be followed.

Dr Ahmed said the impact of corona in Pakistan is different from China or Europe because the virus affects in different ways in different areas. He said it has also been proven in case of other diseases.

Some experts consider July and August as peak time for the virus in Pakistan. However, there are many others who are hoping for the arrival of the vaccine by September.