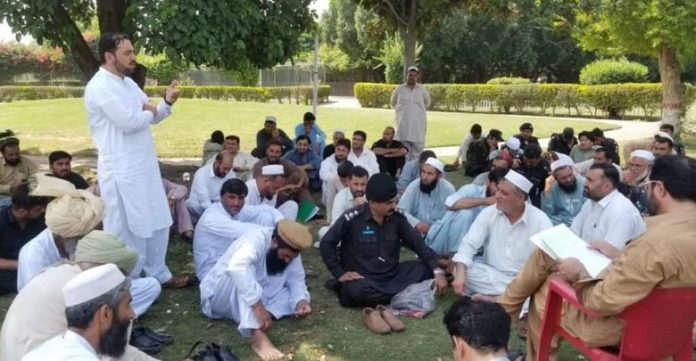 The announcement was made at a meeting of Khassadar personnel at Bagh-e-Naran in Hayatabad, Peshawar, on Wednesday. The meeting was headed by All Fata Khassadar Force Chairman Said Jalal Wazir.

Said Jalal Wazir said at the meeting that the provincial government had promised to integrate them into KP Police and give them all the privileges enjoyed by policemen. However, he said that now the KP government thorough Levies and Khassadar Acts was planning to merge Khassadars into Levies instead of KP Police, which is unacceptable.

Said Jalal Wazir said 28,000 Khassadars will go to any extent for their rights. He said if the government failed to fulfil promises with the Khassadar Force and implemented the 2019 Act, then they will start holding protests. He said Khassadars will never accept deployment of any police official in merged districts except the district police officer (DPO).

The said Act has been approved by the KP cabinet and it will be tabled in the KP Assembly for approval on September 07.

The KP government of April 08 had announced integration of Levies and Khassadar personnel in merged districts into KP Police. According to a notification issued from the office of the chief minister, a period of six months was set for the process. Under this arrangement, the integration process must be completed in October this year.

Said Jalal said that after completion of deadline of October for the integration process, Khassadars will start protests if the government failed to fulfil its pledge in letter and spirit.

The KP cabinet on Friday approved the Khyber Pakhtunkhwa Levies Force Act, 2019, and Khassadar Force Act, 2019 to move forward the process. But the issue still remains unresolved as now Khassadars have rejected these Acts.