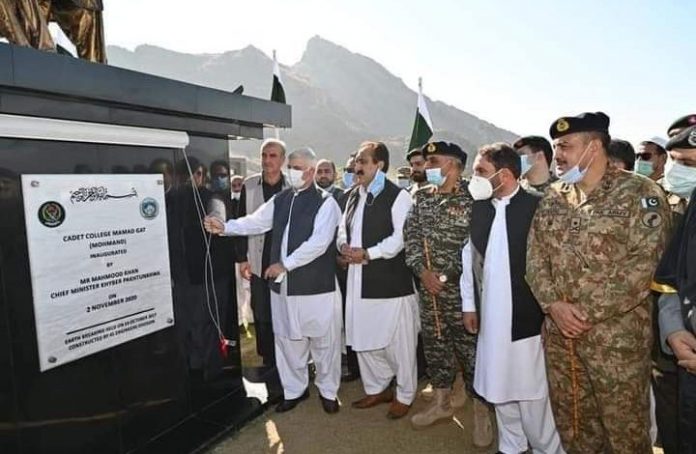 However, the local people staged protest over the issues of alleged appointment of non-local people on Class-IV seats and inadequate quota for local people in the college. The local Pakistan Tehreek-e-Insaf (PTI) activists also participated in the protest.

Mamadgat Cadet College constructed at an area of 104 acres has cost Rs984 million. Besides best educational facilities for students, accommodation for students and teachers is also available at the cadet college.

The chief minister during his visit announced establishment of sports complex at the college. He also visited the police training centre in Baizai and reviewed the training arrangements.

Mahmood Khan said while addressing the policemen that they are now part of KP Police. He said policemen of merged tribal districts are being given modern training to equip them with modern techniques to cope with modern security challenges. He said miscreants on the other side of the border are trying to create law and order situation in Pakistan. He said that during this challenging situation, police needs to be fully prepared to thwart any threat.

The chief minister assured the policemen of merged districts that they will get equal facilities and incentives like KP Police.

Earlier, local people held protest during the inauguration of cadet college by the chief minister. The protesters said non-local persons were appointed on Class-IV seats in the Cadet College and quota for local students is also inadequate. He said they will expand their protests if the promises earlier made with them were not fulfilled.