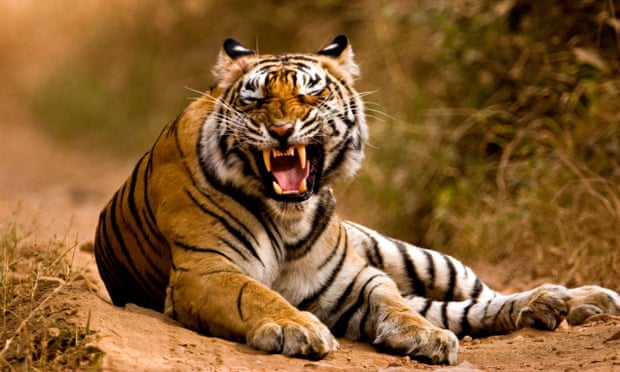 LOWER DIR: A wild tiger killed as many as 45 goats in Upper Dir district of Khyber Pakhtunkhwa on Tuesday, which caused terror and panic among villagers.

The local residents say the prowling tiger went on killing spree when it entered a herd of goats at Hashim Maidani area within the limits of Munda Police Station and killed 45 goats. No human being was present at the place when the incident took place. The tiger was believed to be hungry for many days and it caused maximum damage when it came across the herd of goats.

The people of the area have called upon the relevant authorities to take action for capturing or killing the tiger before it causes harm to humans. They asked the Wildlife Department to take necessary action. The locals said sheep or goats are regularly attacked by wild predators and their remains are found. They said that people had meagre resources of income and they heavily depend on raising livestock to make ends meet.

The local people said their children play in the streets and fields and they are exposed to grave danger of wild predator attacks. That is why, they said, they always remain in fear as they had to go out for work and cannot keep children under watch all the times. They said the government should also extend help to the owner of the dead goats.

The KP government has planned to set up 400 new trout fish farms in the province to increase fish meat production and generate employment opportunities for youth.
Official media reported that 200 fish farms have been established in the province during last few years and a comprehensive project was prepared to set up 400 more model farms for trout breeding during next three years to bolster fish meat production and alleviate poverty.

Officials say Malakand and Hazara divisions besides entire merged tribal areas were most suitable for fish farming where trout villages would be set up with the help of private sector keeping in view of its favourable climate conditions and abundance of water resources.

The climate of Tirah valley in Khyber tribal district and Parachinar in Kurram district are also favourable for trout farming.