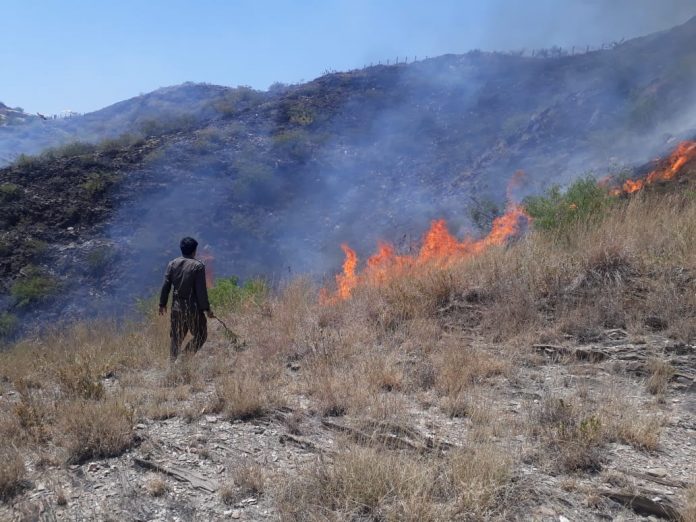 PESHAWAR:  As the Rescue 1122 workers and other government departments are busy in extinguishing the fire on Karamar Mountain top, a wildfire engulfed the hill of Takht-e-Bhai ruins on Saturday.

The rescue 1122 official informed that they have extinguished the fire near the world heritage site after 5 to 6 hours struggle. The workers used the traditional methods to put off the fire as no heavy machinery or water cannon could reach to Mountain top.

The official said that it was again hot weather and dried bushes on the hills which caused the fire and it was further spread by strong winds. Though the Mountain and forest fires are not the domain of Khyber Pakhtunkhwa Rescue 1122 service, however, the workers have performed their diligently.

The rescue 1122 has said that wildfire on three parts of Karamar Mountain has been extinguished while the operation still underway. There is huge government machinery present in the area but due to the mountainous region, it couldn’t reach the mountain top.

Nine helicopters of Pakistan army’s aviation wing has also participated and sprayed water that has helped in controlling the bush fire. The rescue 1122 has said that the cadet college has completely been made safe from the fire and now three fire extinguishers have been stationed there to avoid any emergency situation.

The Director general Dr Khateer Ahmad and secretary forests, Nazar Hussain has formed teams of Rescue 1122, forest workers and local people to reach to the top of the mountain early morning to have control over the fire.

The firefighters have to walk atop the mountain for almost an honour to continue their operation. The rescue 1122 teams from Nowshera, Charsadda, and Mardan were deployed to cope with the emergency.

The officials said that more than 75 per cent of the fire has been extinguished. Though holidaymakers were there in large numbers as part of Eid celebrations, no damage to public life was reported in the incident.