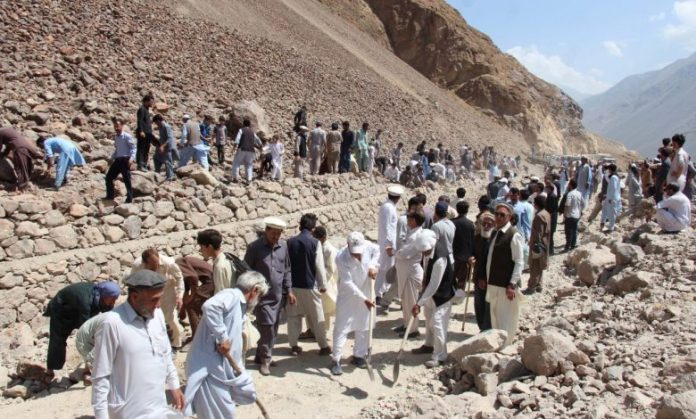 CHITRAL: The people of Mastuj tehsil of Upper Chitral district have started work on construction of 30 kilometres road in Mastuj on self-help basis.

A simple ceremony in this regard was held near Mastuj bridge on Friday where Professor Dr Muhammad Ismail, the leader of the volunteer work, said he has initiated the campaign to build the road on self-help basis as the government is not paying attention to the problem of roads in Chitral due to which the local people are facing a lot of difficulties.

Hundreds of people of Mastuj carrying different construction tools came to the roadside in shape of a rally and started work on construction of the 30-kilometre road.

Professor Ismail said while talking to TNN that the local people are not revolting against the government, but they are building the road as the government is unable to allocate funds for this purpose. He said Pakistan has given a lot to us and now is time for us to give something back to the country.

Professor Ismail said repair of the road will be carried out in first phase, while in the second phase, coal tar will be applied on the road for its pavement. “So far, we have not collected any donation for the road construction, but if anyone does so then it will be welcomed,” he said.

Former tehsil nazim Shahzada Sikandarul Mulk said the local people had constructed the road 25 years ago, but the government paid no attention to it. He said the people are again compelled to build the road as they don’t expect the government to do anything in this regard. He said the local people intend to invite Prime Minister Imran Khan for the road inauguration after its completion.

Hasil Murad, a social activist, said the condition of the road is very poor which is causing accidents on routine basis. He lamented that Chitral has been deprived of essential facilities like roads.

Professor Ismail said thousands of tourists visit Chitral every year, but they face problems due to poor condition of roads. He said the locals plan to arrange a donors conference for raising funds for Mastuj road construction.

Bisma Aziz, a student, said she fears for her safety while travelling on this dilapidated road for going to her college.

The area people have called upon the government, donor agencies and well-off people to help them in construction of the road.