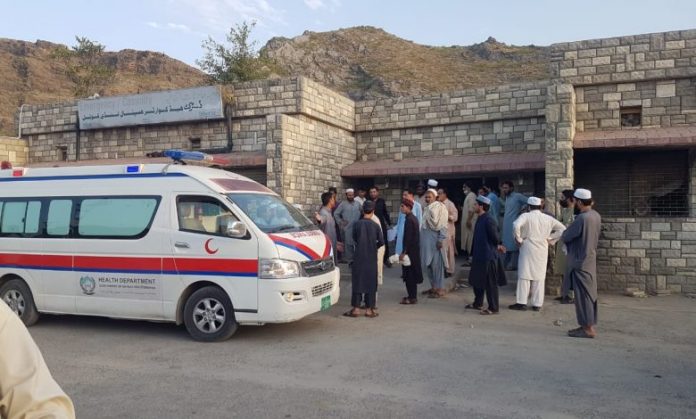 LANDIKOTAL: Five members of a family, including a woman and four children, have lost their lives and four others sustained injuries in a blast inside a house in Landikotal tehsil of Khyber tribal district.

Sources said the incident happened due to explosion of a mortar shell inside the house. The people of the area on Wednesday staged a protest demonstration at the Pak-Afghan Highway over late arrival of bomb disposal squad (BDS) to the house as it was reported that two more unexploded mortar shells were found in the house.

Sources said the incident happened in Zakhakhel near Tatara ground on Tuesday. The children of Muhammad Shafiq had found three mortar shells and brought these mortars home considering that it might be a thing of value. The wife of Muhammad Shafiq when came near to her children to inquire what they have brought home, suddenly a blast happened which injured eight persons of the family.

The area people immediately shifted the injured persons to District Headquarters Hospital. In hospital, four children Salman, Farman, Yasmin and Bakhtawar Shah were pronounced dead on arrival. The remaining injured persons were immediately shifted to Hayatabad Medical Complex (HMC) Peshawar. The wife of Shafiq Khan also succumbed to her injuries at hospital. Her body was taken to Khyber Medical University for post mortem.

The injured were identified as Liaquat Khan, Tabassum, Bushra Bibi and Iqtidar Khan. They are still receiving treatment at HMC Peshawar.

Police said evidences are being collected from the incident site. However, no arrests have been made so far.

Eyewitnesses said two more mortar shells were found at the home where the blast happened due to which the area people were panicked and extremely concerned.

The people of the area staged a protest demonstration at the Pak-Afghan Highway over delay in arrival of the BDS team and clearing the incident site. They demanded full inquiry into the incident.

A large number of people in merged tribal districts have lost their lives and many others were rendered disabled in such incidents recently. Whenever children find some unexploded material in the fields or any other place, they mistake it for a toy or thing of value and bring it home, which often results into tragic consequences.