PESHAWAR: A woman along with her two daughters was electrocuted and a child was injured in Ambar tehsil of Mohmand tribal district on Thursday.

TNN correspondent reported that a power transmission line had fallen on the ground in Loe Shah area. The five-year-old daughter of Muhammad Aamir went towards the wire and her mother carrying another one-year-old daughter in her hands rushed towards her to save her life, but all the three were electrocuted. The little girls who lost their lives were identified as Abna and Lubna.

Another child, Owais, was also injured in the tragic incident.

In the same area, three persons of Dwazai tribe recently lost their lives when a power line fell on their vehicle.

TNN correspondent reported that heavy rain along with thunderstorm lashed different parts of Kurram for three hours due to which nullahs were flooded and several mud-made houses collapsed. The floodwater also blocked routes due to which most areas in Kurram were cut off from rest of the tribal districts. 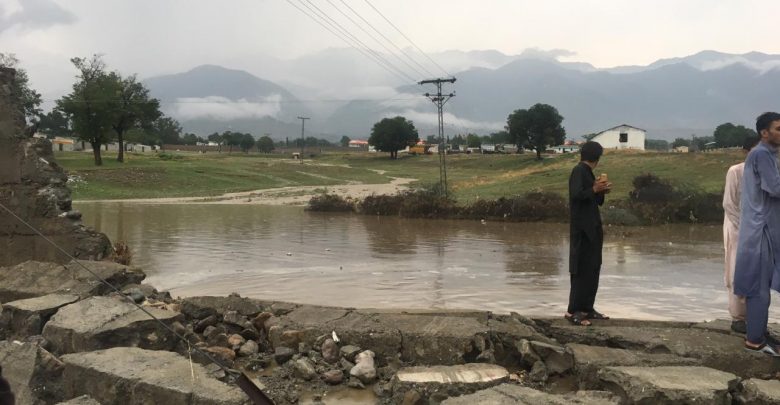 Floodwater entered many houses around Parachinar city due to which people vacated their houses and shifted to safer places. The electricity system was also badly damaged in the area and power supply was disconnected.

Additional Deputy Commissioner Dr Afaq Wazir said emergency has been declared in the hospitals and relief teams have been sent to the areas where needed. Sources said 22 people were injured in rain-related incidents who were brought to different hospitals.

In Parachinar, the water supply system was badly damaged and people were facing severe problems. The local people are taking part in rescue activities on self-help basis.

Heavy rain also played havoc in Kumrat area of Dir. A house was washed away in flash flood in Thall area.

The Kumrat road was blocked due to flash flood and land sliding due to which the local people and tourists were stranded at the tourist site. Sources said the flash flood was advancing towards Kalkot and there was danger of more damages.