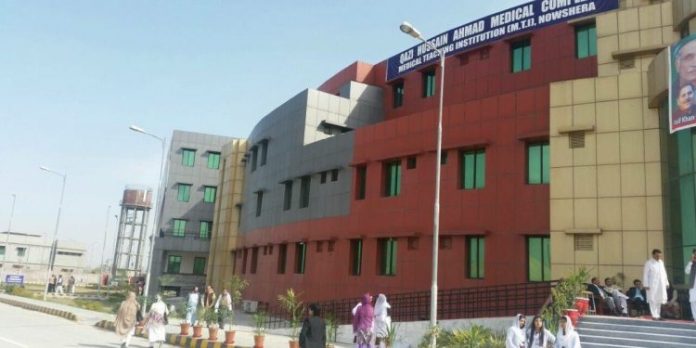 PESHAWAR: Death of a woman at Qazi Hussain Ahmad medical complex in Nowshera district sparked a protest by her family who alleged that the death occurred due to “negligence” of the hospital authorities.

As a protest, they put the dead body at the hospital’s hall and accused the doctors and administration of not providing proper health facilities due to which a woman died in the hospital after giving birth to a child.

The medical director of the hospital ordered an inquiry into the incident.

Yasir Khan, the husband of the women while providing details of the tragedy said that his family has admitted her to the hospital three days ago. After the birth of the child, the doctors told them that her conditions are not good and they have to shift the patient to Mardan Medical Complex. However, Yasir said, there was no ambulance available in the hospital.

Lal Husain, the brother of the woman accused that his sister died in the hospital due to the “carelessness” of the doctors and demanded the government to provide them with justice. As a protest, they put the dead body in the hall of the hospital and chanted slogans against the administration of the hospital.  After the tragedy, Medical director of Qazi Hussain Ahmad medial complex, Dr Arif Khan assured them that justice will be done and ordered an inquiry into the incident.

Qazi Hussain Ahmad hospital is a new health facility in the district. It was inaugurated by the Pakistan Tehrik-e-Insaf (PTI( Chief Imran Khan in 2017 after almost 12 years of construction work at a cost of Rs2 billion. The hospital, which was announced 12 years ago, started treating patients in March 2017.  It is named after Jamaat-i-Islami (JI) leader, late Qazi Hussain Ahmed, who had sanctioned a new category A hospital for his native Nowshera district as a senator in 2005.