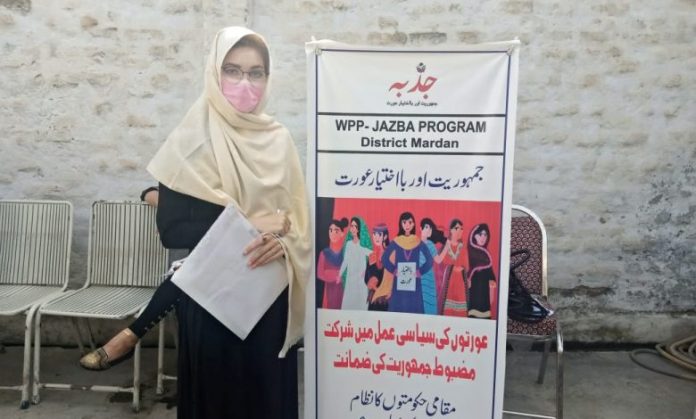 Mardan: In Mardan, under the supervision of the South Asia Partnership, a two-day training was given to female students on women’s participation in politics and their right to vote, and several topics were brought under discussion.

At the start of the training, Nusrat Ara, who is a homoeopathic and Master training and apart from that she is also associated with different organisations, highlighted the difference between gender and sex and said that gender is created by nature for both men and women alike. For example, women giving birth and men sporting a beard or moustache are their physical characteristics. Moreover work, resources and power are distributed because of the basis of gender attitude and compel them to play their assigned roles.

If we put it simply, it means sex is a physical appearance that is natural and cannot be changed in any way, no matter where you go, it is the same everywhere and in every society. While gender is determined by society and keeps on changing over the period.

According to Nusrat Ara, we have developed this strong notion that the household chores are assigned to women and can be performed by them only and similarly the outside work can be done only by men.

Moreover, a detailed discussion was held on society, culture and state that every person has his special identity and society can be formed by merging all of these identities. Or all individuals living in specific geographical boundaries who belong to different cultures and religious groups could combine to make a society.

A state can be formed with the help of a constitution by combining the interrelationships of all individuals belonging to different cultural and religious groups living in a certain geographical area.

All around the world, different states operate under three different political systems: monarchy, dictatorship and democracy.

The monarchy system has been observed from around the world since ancient times and still exists in some parts of the world. Under this system, members of the same family rule from generation to generation no importance are given to the opinion of the masses.

On the other hand, in the case of dictatorship, a government is being forcibly established over a nation and no heed is given to public opinions. The military dictatorship also came as a Disguise for a dictatorial system.

As compared to these two, in a democracy the public’s opinion is supposed to be the most important thing. They are given the right to cast votes whom they consider suitable and representatives are selected on their approval who further form local, provincial and national governments and make laws and rules for the protection, welfare and development of people.

The training highlighted and discussed politics raising some important questions, what is politics? Where does politics take place, how is it done and what are the requirements of politics?

The participants were told that politics is the combination of activities that help us to make decisions about individual or collective interests and their proper use of resources. And for that purpose, we need to have talent, technology, skills, resources, people and the knowledge of evaluation of one’s power in political decision making.

The idea of Mobilisation was also discussed and made clear on the second day of training that it’s the act of uniting against any societal, economical or social issue and the students also expressed their views on Mobilisation.

During the training, The students participated in different activities and made clear that based on gender we have drawn a line that only men can participate in social activities or only women can do charity work.

If we take a look you will find men working in every field. A man can be a doctor, a pilot, an engineer, a lawyer, a policeman or a soldier but why don’t we think that a woman can do the same thing or perform the same duties? A man too can cook and a woman also can earn money.

Similarly, if a man can contest an election, then why not a woman?

Women are equally a part of the population as men then why women are being given less opportunity in politics. Women are also a part of our society, she also has a right to cast a vote then why she is being restricted to do so or even so if she does cast a vote but that’s too is according to the will of the man of the house

Women are an important and crucial part of our society. Restraining her from any political or other field is like paralysing a large part of the country or a nation.

At the end of the training, students were given certificates along with a task to take a session with 15 women of their neighbourhood who do not have an identity card and are unaware of the importance of their vote so that they can also step forward and participate in the development of their country and nation.