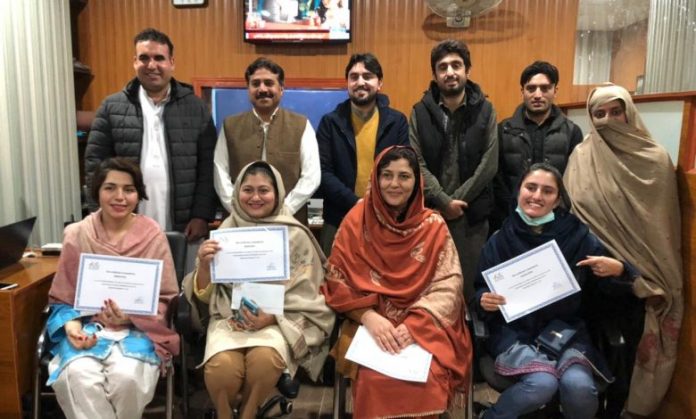 An award ceremony took place in the TNN’s office in the Deans Trade Center. The Khyber Union of Journalists president Nasir Hussain was the chief guest at this occasion.

The fellowship included the training of the journalists about constructive journalism as well as production of the audio-visual stories.  A jury including senior journalists Syed Fakhr Kakakhel, Nighat, Tayyab Afridi, Said Nazir and Iftikhar Khan.

The first position winning story received cash prize of Rs 40,000, while the runner up Rs 30,000 and third position holder Rs 20,000. Besides, the winners were also given commendation certificates as well.

Mr Hussain hoped that the TNN management and its team will continue this tradition and provide opportunities to newcomers as well as play a key role in their careers.

Said Nazir Afridi, TNN’s Executive Director thanked the special guest. He said that introducing traditional journalism to new trends was TNN foremost objective. Besides, he said that they were also committed to highlight the issues of the region in the best possible way.

Jamaima Afirid, the first position holder in the fellowship, said that constructive journalism was very important because it presented both the problems as well as their solutions.

Wagma Feroz, said that besides highlighting the issues, it was also important to present solutions to them. This was one of the most notable aspects of constructive journalism, she said.

Zeenat Khan also termed the constructive fellowship program and competition in it as an excellent experience. She said  that in her 13 years of journalism he had never done constructive journalism. “We only used to highlight issues but this was the first when we also posed the solution for those issues,” Ms Khan said.