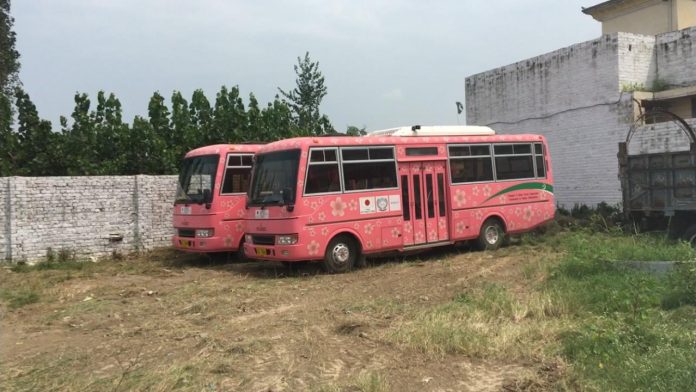 MARDAN: The much-trumpeted “Pink bus service” of Pakistan Tehrik-e-Insaf (PTI) government is no more functional in Mardan. The buses are now gathering dust in a local petrol pump as the contractor says they are unable to even earn daily expenses.

The service was launched with the support of Japan government by the KP government in the month of April 2019 in two districts – Mardan and Abbottabad – in order to provide safe and easy transport service to women in both the districts. In Abbottabad, the service is still active, however, in Mardan, it has failed to attract women passengers.

All the seven buses were given to a contractor to operate it on different routes of the city; but after few months of services, he parked it saying that the fare he receives from female students is not enough to fulfil the expenses due to rising gas and petroleum prices.

Program manager of Pink bus service, Gohar Ayub said TNN that the contractor was facing loss for the last five months. He said that only women are allowed to travel in the buses while the culture Mardan is different as here woman doesn’t travel without man due to which no enough passengers were available on any route. The project manager revealed that the expense of a single bus was 5000 per day but the income was usually not more than Rs2500.

Gohar Ayub suggested that if the government provide subsidy on the fuel of buses or allow the contractor to allow female passengers who travel with their men that it will be helpful in making the service profitable.

The program manager informed that the service is more successful in Abbottabad than Mardan as in Abbottabad women mostly travel alone. Gohar furthered that it is also very difficult to hire female conductors for the buses as here women are not ready to adopt this profession.

A female conductor told TNN that she has passed four months as a pink bus conductor. She revealed that in the first two months, she was paid 16000 per month but later on her salary was reduced to 8000 only. She added that to increase the income, the contractor has also started boarding male passengers in the women-only buses due to which women conductors have to resign.