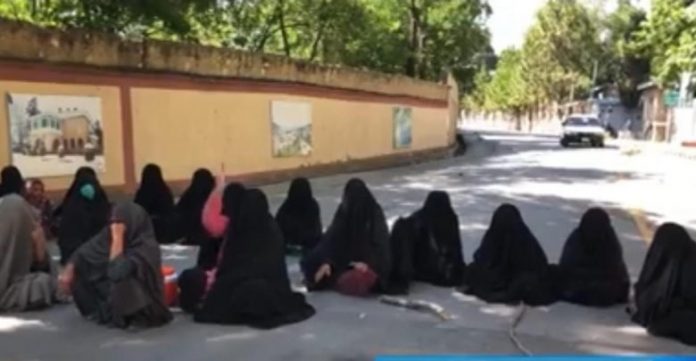 SADDA: The lady searchers – the women appointed by police department for searching other women – on Thursday staged protest outside the office of the deputy commissioner in Kurram tribal district over unpaid salaries.

The protesting policewomen said they will continue their sit-in till acceptance of demands. TNN correspondent reported that over 40 policewomen participated in the sit-in outside the deputy commissioner’s office. The protesters also chanted slogans against the local administration.

Leader of the protesters, Sahiba Bibi said while talking to media that lady searchers are performing duties at different check posts of Kurram for the last one year, but they have not been paid salaries. She said the women searchers kept performing their duties during harsh weather conditions, even during snowfall in winter and extreme heat during summer. She said the women searchers played important role in making the area secure, but it is highly unfortunate that they remained deprived of their salaries. They said they also had to perform duties in tents due to harsh weather conditions.

Sahiba Bibi said the protest of policewomen will continue till payment of salary and acceptance of other demands.

The protest leader alleged that the officials who were well connected had been regularised, while those having no political connections and other support were even kept deprived of their salaries. She said several promises were made by the authorities for payment of salaries, but still they are waiting for it.

A lady searcher, Tamama, said no woman in Pakhtun society comes out of her home until the circumstances compels her for doing so.

“We are from humble background and we are in the police to earn livelihood and support our families. We have obtained loans from some people and now it has become impossible for use to make ends meet,” she said.

Tamama said if the authorities still remained indifferent, then they will start hunger strike camp outside the DC office.