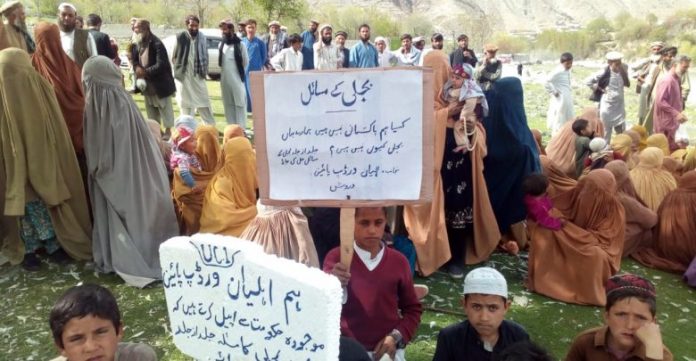 CHITRAL: For the first time in Chitral, the women of Wardab area along with their little children came out of houses and staged protest over non-availability of electricity and clean drinking water facilities.

The women along with their children and male members of family staged a sit-in at Osek bridge. The protesting women said even in this modern era, their area is deprived of basic facilities of electricity and clean drinking water. They said a 106MW grid station has been completed in Golian area of Chitral which is providing electricity to several areas outside Chitral, but its own Wardab village remains deprived.

The area residents said the government has not initiated any clean drinking water project in the village and they are compelled to use the water from the river for consumption and other uses. They said different diseases are spreading in the area due to the use of unsafe water.

Inzer Gul, a local elder, said while talking to TNN that that people from Gojar, Pathan, Chitrali and other origins live in the village, but they have been kept deprived on the basic facility of electricity.

A woman participant of the sit-in told TNN that her children cannot study in the night due to lack of electricity. She said the children are troubled by hot weather as there are no fans. Another woman said they fetch water from Chitral River in pots on their heads which is a tiresome and difficult exercise. She said the women find it difficult to come out of their houses and bring water from river, while the river water is also not fit for consumption and causes different diseases.

The social activists and local leaders also arrived at the protest site to express solidarity with the protesters. Social activist Akmal Bhutto said it is the responsibility of the government to provide electricity, roads, water, education, health and other facilities to the people. However, he said, the people of Wardab are deprived from these facilities.

Union Council Nazim Imranul Mulk said it is the only union council in Chitral which lacks water and electricity facilities.

When contacted, Peshawar Electric Supply Company (Pesco) Chief Executive Dr Muhammad Amjid Khan said the deputy commissioner of Chitral needs to send a letter to Pesco after which its team will visit the area for feasibility study. After that, he said, the deputy commissioner will provide the necessary funds to Pesco from the federal or provincial government, after which the Pesco team will go to the area and install power transformers and pylons.

Assistant commissioner Darosh also visited the protest camp and assured resolve the issue within 10 days. The protesters ended protest and warned that they will resume agitation if the pledge was not fulfilled.