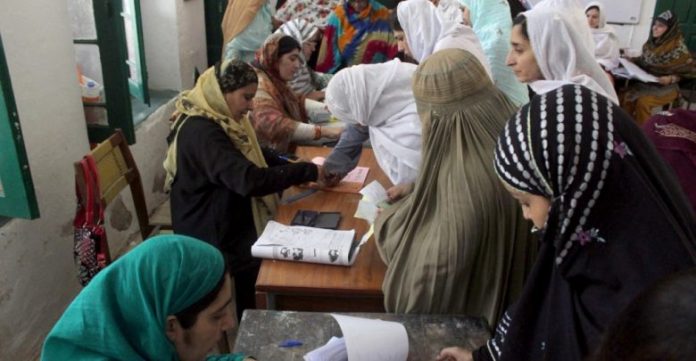 PESHAWAR: The Election Commission of Pakistan (ECP) and other relevant government departments have accelerated preparations for the upcoming elections in tribal districts on July 20.

Candidates are convincing the voters to vote in their favor by informing them about their manifesto and also urging them to bring their women to polling stations for voting on election day and fulfil their national responsibility. Under election laws, the ECP can nullify results of any constituency if the ratio of women voters is less than 10 percent. Unlike past practices, the participation of women in last two elections can be termed encouraging. The government institutions, election candidates and social circles are hoping for further increase in women voting ratio in upcoming elections in merged districts.

Contesting of elections by women candidates and their participation in voting process has always remained a controversial topic in newly merged tribal districts of KP. Some people are still opposing participation of women in elections, while there are many others who support women candidates and are making efforts to ensure that tribal women cast their votes in elections according to their own free will. Previously, the participation of tribal women in elections was negligible, but these trends have changed during the last two elections. In 2013, Badam Zari from Bajaur became the first woman to directly contest elections from a general seat. In the 2018 general elections, Ali Begum from Kurram tribal district surprised many by directly contesting elections. Naheed Afridi from Khyber district and Malasa from Kurram have taken this trend forward in the July 20 elections.

Dr Arif Hussain, independent candidate from PK-108, Kurram, says over 1.1 million voters among the total 2.8 million registered voters in tribal districts are women. He says women’s votes can be decisive in winning or losing of any candidate. He says he is urging the people to also bring their women to polling stations on election day.

He says: “We see participation of women in tribal elections positively. I will personally conduct door to door campaign and I would advise women members to meet all the women voters at their homes and convince them for voting. Women constitute more than half of the country’s population and they cannot be ignored.”

Malik Zia, a tribal elder from Miranshah, also supports women’s participation in voting process. He says women should be allowed to cast votes according to their own free will.

He says: “I encourage women’s participation in elections. Women must be encouraged to cast their votes. Women voters must particularly support women candidates in elections. People of North Waziristan are politically aware now and polling stations have also been established for women voters.”

Malik Sharafat, a tribal elder from Bara, says he is still against women’s participation in elections. He says women can only be allowed to cast votes if arrangements are made for pardah under tribal traditions.

Nausheen Bibi from Orakzai urges tribal women to come out of their homes on July 20 for voting. She also supports two women candidates in tribal elections and says they can change destiny of tribal women.

Nausheen says: “There are some tribal areas where women are not allowed to cast votes. If we give our votes to female candidates then they can solve many problems of tribal women. Men cannot understand problems of women. Female candidates can be better choice for tribal women to resolve their problems. Women are more capable of bringing change.”

Besides 16 general seats, tribal districts have also got four special seats for women and one seat for minorities. All parties have announced their candidates on special women and minorities seats. The Jamiat Ulema-e-Islam-Fazl has given ticket for minority seat to Suriya Bibi from Landikotal, Khyber district, who belongs to Christian community. She says she is already taking part in welfare activities for destitute women in her area. She says her success in the elections will benefit the whole community.

Suriya Bibi says: “It was a difficult decision for me to join politics. I am still in the state of disbelief as I did not expect a party ticket for provincial assembly seat and I never asked the party leadership for it. I am very happy that the party has entrusted me with this important responsibility.”

She says: “This time two women are taking part in elections and next time more women are expected to contest elections from tribal districts. Tribal women must vote for women candidates as men have done nothing for tribal women in the past. We will actively take part in voting.”

Kiramat from Bara says it is good for tribal districts that women are contesting elections first time. She says women have right to vote and they will exercise this right.

A social activist, Naila, says: “Positive change will be witnessed with women contesting elections in merged districts. Women have equal rights like men to contest elections.”

A tribal citizen says he has performed duties at polling stations in the past and noticed shortage of polling officers and assistant presiding officers in women’s polling stations who cannot handle a large number of voters. He says number of staff must be increased at women’s polling stations to make voting process quicker as many women voters leave their children at home while coming to cast their votes and they want to return home as quickly as possible. He says women voters also face difficulties due to lack of transport facility. He says transport facility must be provided to women voters to ensure maximum turnout.