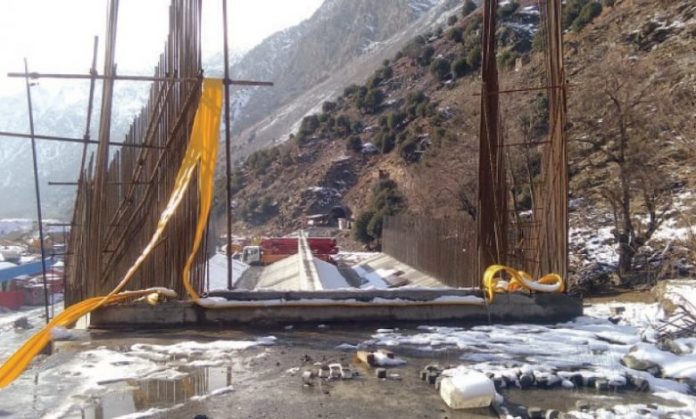 CHITRAL: The Water and Power Development Authority (Wapda) has stopped work on restoration of water channel at the Golian hydel power house in Chitral having capacity of producing 108 megawatts electricity.

Few days ago, the glacial outburst in Golian valley had damaged standing crops, roads, bridges and grid station. Power supply to Chitral was also disconnected from the said grid station and supplied from the alternative sources from national grid since then.

Sources said the Wapda officials have parked the machinery at a side of the grid station and started work for clearing the wreckage brought by the flood caused by the glacial outburst.

Wapda is also responsible for restoration of Golian road and bridges being part of the power project. However, only the bridge No 1 could be restored so far, while traffic has also been restored on bridge No 2 by making temporary arrangements. Traffic could not be restored on bridge No 3 as repair work has not been started on it so far. About 500 households in Golian are facing a lot of difficulties due to this situation. The mobilisation of machinery is also not possible due to lack of access to intake point of the grid station.

Sources said approval of restoration of power channel tank, road, bridges and other infrastructure has not been granted by the higher authorities so far. After stoppage of work by the Wapda authorities, the power consumers of Upper Chitral are very disappointed. The voltage of the power being supplied from the national grid is very low and it is impossible for the consumers to use power appliances with it. The local residents say the appliances run with power are being going out of order due to extremely low voltage and they are facing difficulties in this hot summer.