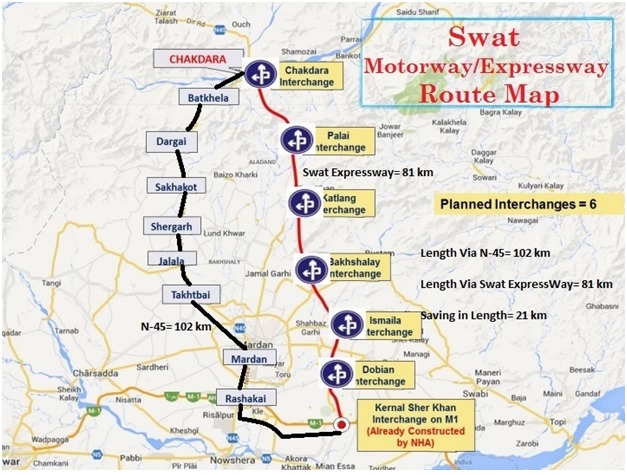 PESHAWAR, 06 August: The ground breaking ceremony of the Swat expressway is expected next month which will be a major game changer for the province, generating not only immediate benefits but will also providetremendous prospects for development of the Province.

According to a press release issued here on Saturday, the Expressway is a mega project to be launched by the Provincial Government under the Public Private Partnership Act 2014 which will be constructed at an estimated cost of Rs 38 billion in two years.

The 81 km long Expressway will connect Karnal Sher Khan Interchange on Peshawar-Islamabad Motorway with Chakdara tunneling its way through mountains at Palai and Ala Dhand. Two Kilometer of the expressway falls in the vicinity of District Nowshera, 18 Km in Swabi, 40 Km in Mardan and 21 Km in Malakand. The total width of the expressway will be 80 meters.

According to officials of the Pakhtunkhwa Highway Authority (PKHA) the length of the tunnels has been estimated at about 2Kms.  With the completion of the Swat Expressway, the journey from Karnal Sher Khan Interchange to Chakdara will take only 45 minutes. According to present estimates, more than 18,000 vehicles will be able to use this route on daily basis generating direct and indirect revenue.

The expressway will be constructed on the pattern of motorway with as many as four lanes which will be extended to six lanes afterwards.

Interchanges on the expressway will be constructed at Dhobian, Ismaila, Bakshalay, Katlang, Palai and Chakdara. It will provide access to more than 40 villages which were previously inaccessible generating numerous business opportunities for local dwellers.

Besides providing tremendous job opportunities to residents of adjacent villages, these areas will witness remarkabledevelopment in its business because of easy access to major market places. Previously these areas remained backward because they were cut off from major routs making transportation and business extremely difficult.

Moreover, the route will also provide tremendous boost in the Tourism Sector because of easy access to tourist spots in swat and adjacent areas and will generate indirect revenue for the province and business opportunities for thousands of people.

According to officials from the Pakhtunkhwa Highway Authority (PKHA), the expressway is also of strategic importance because it will provide easy and fast access to remote areas that were previously inaccessible.

The land acquisition for the project is in its final phases with more than 70% work being completed by the revenue department. Moreover every effort has been made to protect forestry of the adjacent areas and less than 100 homes will be affected by the entire project.

The Project has been handed over to the Frontier Works Organization (FWO) under the Built, Operate and Transfer (BOT) Scheme in the Public Private Partnership Act of 2014.