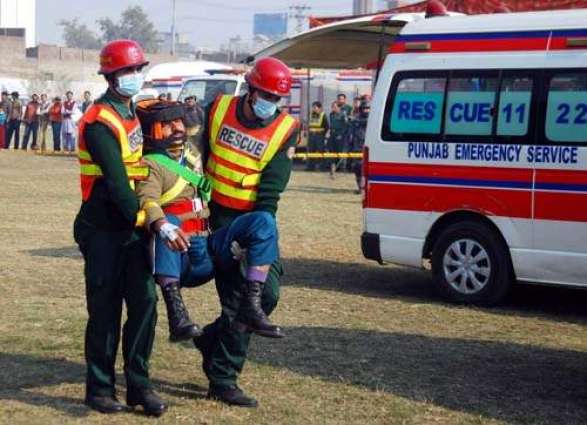 KOHAT:  World Civil Defence Day was observed in Kohat on Friday. Deputy Commissioner Mattiullah was the chief guest in a ceremony to mark the day and attended by volunteers of the civil defence, civil society and students of government schools.

Speaking on the occasion the deputy commissioner said that role of volunteers and civil defence department was very important because volunteers of civil defence protected the lives and properties of people during natural disasters, flood, emergency and war.

He also highlighted the importance of importance of civil defence and added the volunteers of the department worked without expecting any benefits in return and without any discrimination, particularly in emergencies.

The volunteers of the civil defence also presented a demonstration and the speakers lauded services of the volunteers. The DC also said that the entire nation was standing shoulder to shoulder with the country’s army which had full capability to give tit for tat response to the enemy.

KP Minister for Finance Taimur Salim Jahgra and Senator Fida Hussain were also present on the occasion. They apprised and discussed the problems of the people of Kohat and Hangu with the Chief in detail.

The Chief Minister on this occasion said that while on the one hand, the general masses were continuously reposing over-whelming confidence over the leadership and policies of PTI while on the other hand have a lot of expectation from them. Therefore, they were making every effort to prove up to these expectations and thus working round the clock to resolve the long-standing problems of the people on a permanent basis.

He said that he will soon convene an extended meeting of both the local representatives of the two districts as well as the public servants so that a proper strategy is worked out for the resolution of these longstanding problems and welfare of the general masses there.