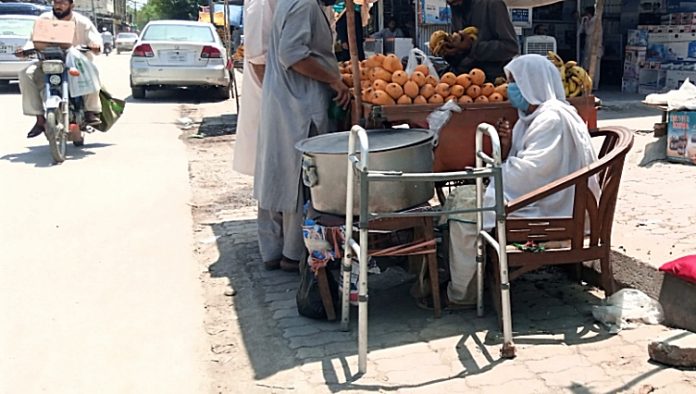 NOWSHERA: Throughout history, hard working women have battled boldly and tirelessly to assert themselves as individuals and experts in their fields. Even in our Pashtun society we see a cluster of women who work harder to not rely on men for their needs, and they also have courage to take the duties of their husbands on their shoulders.

One such woman from Nowshera, Ghazala Bibi, 55, is doing her best to fulfill the necessities of life. She said she would prefer death than begging from others.

Ghazala Bibi used to sell corn sitting on the roadside with her wheelchair. She is not alone at home, however, the mother of five yet no one is willing to take the responsibility of their mother. Her husband is alive but got severe injuries on his head in a road accident 12 years ago and he is not able to work.

“My parents married me off thinking that my husband will bear my responsibility, but circumstances have taken me to a situation where I am bearing his obligations,” she said, adding that her husband is alive but still she is leading the life like a widow.

Ghazala has two sons, and both are not educated enough to find any suitable job to support the whole family. She said her poor condition did not allow her to provide education to her children.

According to KP Elementary and Secondary Education Department, about 1.8 million children are out of school in the province and the most fundamental barrier for many parents to their children’s education is poverty.

Ghazala’s elder son has got separated from his mother after getting married and he is working as a servant in a milk shop. His income is also too low to bear the medical expenses of his three years old child who is battling cancer for the last two years.

According to online data, childhood cancer accounts for 10 percent of all reported cancers in the year 2017. There is a dire need for an accurate surveillance system for cancer incidence and mortality.

Ghazala Bibi told TNN that she is also suffering from many diseases like diabetes, joint problems and hypertension yet hardly find some money for medicines.

“Death is fundamental, and one day everyone will taste it, however I don’t want to die just because I cannot afford medicines for myself. For this, I will do as much as I can to cure myself,” said Ghazala.

She further explained that she will struggle a lot on her own but would not allow her younger daughters to go to other places for work, as her elder daughter had already suffered from domestic violence by her husband soon after a month of her marriage and then she decided to take Khula (separation) from him as it was the only option with her to get rid of this harsh situation, but after taking the decision.

In Pakistan, so many women are facing domestic violence. Ghazala not only restricted her daughters to home due to such threats but she also didn’t want them to be the victims of sexual assault as she is alone and not able to protect her daughters from immoral people.

“I saw many young girls raped, murdered, and buried. No one is able to trace them after their disappearance,” she said.

Ghazala is of the view that it is not easy to feel powerless, but when she looks around, she notices many people who are weaker than her and that thing makes it easier for her to understand that she can gain strength, support, and make changes in her life.

“One should not lose hope and have faith in Allah, as He is the only one to give us strength and power,” said Ghazala.